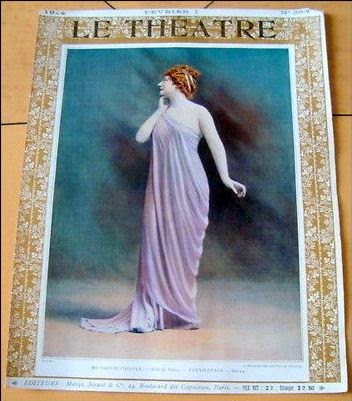 In the 1907-08 season she had her first success at the Théâtre de la Monnaie in as Venus in ‘’Tannhäuser’’ of R. Wagner and as Elena in ‘’'Mefistofele’’ of Boito. In 1908 she made her debut at the Grand Opéra in again as Venus in ‘’Tannhäuser’’ and remained till 1910 a member of this opera house. Here she sang among other things in 1909 in the premiere of the opera ‘’La Forêt’’ of Savart. In the 1910-20 seasons she appeared at the opera houses of Lyon and and guested in other leading opera theatres in the French province. She was was known as an interpreter of roles like the Venus, Santuzza in ‘’Cavalleria Rusticana’’, Valentine in ‘’Les Huguénots’’ and Selika in ‘’L'Africaine’’ of Meyerbeer.

Posted by Ashot Arakelyan at 5:54 PM