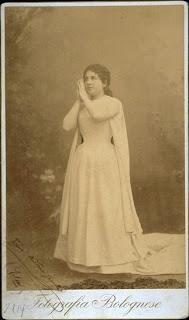 She was the daughter of known soprano Luigia Bendazzi (1829-1901) and the conductor and song pedagogue Benedetto Secchi. She received her vocal lessons from her father and appeared quite early as a concert singer. She had big success as a soloist in ‘’Stabat Mater’’ of Rossini at the Teatro Constanzi in Rome (1884). Her stage debut took place in1885 at the Teatro Comunale in Trieste, where she sang the role of Zerline in ‘’Fra Diavolo’’. Afterwards she sang there in ‘’Dinorah’’ and ‘’Bianca da Cerbia’’ of Antonio Smareglia. That same year she also performed at the Teatro Comunale in Bologna in ‘’Kônigin von Saba’’, ‘’Dinorah’’ and ‘’Le Villi’’ of Puccini. On December, 1885 she made her debut at La Scala appearing in ‘’Carmen’’ and ‘’Robert le Diable’’ of Meyerbeer. In 1886 she again sang at La Scala, but this time in the Italian premiære of Bizet’s ‘’I Pescatori di perle’’. In the 1886-87 season she guested in Lisbon (Teatro San Carlo) and Berlin (Kroll Theatre). In 1887 she was married to the tenor Alfonso Garulli with whom she appeared often. In 1894 she performed at the Teatro Lirico in Milan and at the Teatro Costanzi in Rome as Manon in Massenet’s opera of the smae name. In 1902 she sang at the Teatro Politeama in La Spezia. In 1904 she made guest appearance at the theatre de Aix les Bains. After her retirement she taught singing in Trieste. 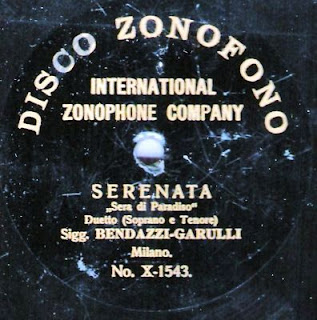 Garulli by Stampanoni
Posted by Ashot Arakelyan at 3:15 PM 0 comments 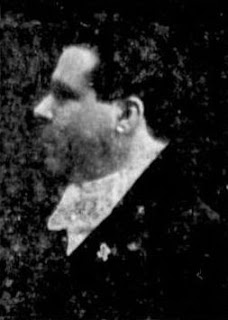 He began his career in italian provincial theaters where he sang during the first decade of the 20th century. In 1908 he appeared at the Teatro Nazionale in Rome as Edgardo in Donizetti’s ‘’Lucia di Lammermoor’’. In the next year, he performed at the Teatro Rossi in Pisa as Fra Diavolo in D. Auber’s opera of the same name. In 1911 De Gregorio guested during a season at the Italian opera in Holland. From 1915 to 1920 he traveled with smaller opera troops through North America. In 1919 he sang with the San Carlo Opera Company in New York as Turiddu in Mascagni’s ‘’Cavalleria rusticana’’, while soprano Rose Ponselle appeared as Santuzza. Probably after finishing his career, De Gregorio taught in USA. 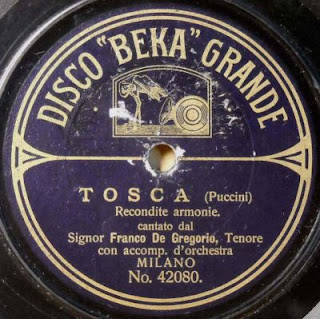 De Gregorio by Stampanoni
Posted by Ashot Arakelyan at 10:29 AM 0 comments 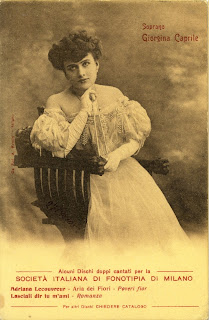 She studied in Milan with Carignani. Her stage debut took place in 1900 at the Teatro Costanzi of Rome as Suzel in Mascagni’s ‘’Lamico Fritz’’, while the famous tenor Fernando De Lucia sang the role of Fritz. In the same season they also appeared together in Puccini’s ‘Boheme’’. During the  following 15 years she performed with success not only at the big Italian opera houses, but also in South American theatres. Among her best roles are Violetta in "La Traviata", Tosca in Puccini’s opera of the same name, Mimi in ‘’Boheme’’ and Manon in ‘’Manon Lescaut’’. 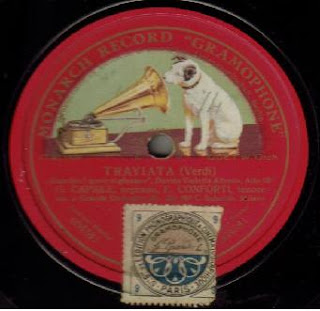 Caprile by Stampanoni
Posted by Ashot Arakelyan at 9:21 AM 0 comments 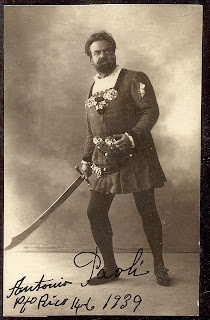 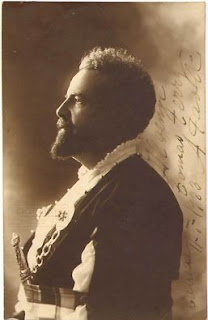 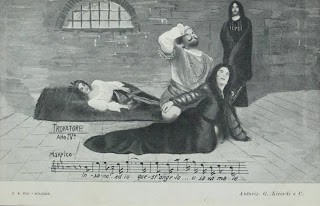 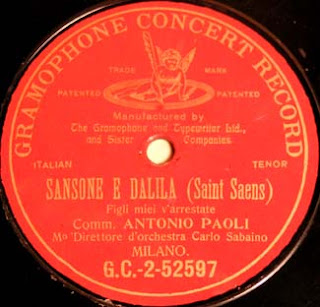 Paoli by Stampanoni
Posted by Ashot Arakelyan at 2:36 PM 3 comments 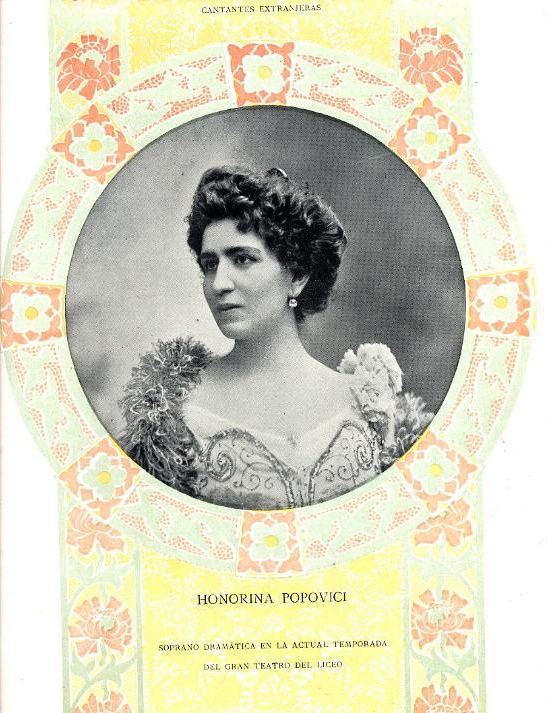 Probably she was born in Romania and received here education in Italy. Here real name was Onoria Popovich and she arrived in Italy approximately in 1902. In 1903 she sang at the Teatro La Fenice in  Venice in Mascagni’s "Guglielmo Ratcliff". Two years later she appeared at the Teatro Regio in Parma in "Siberia" of Giordano. I know that in 1907 she also performed at the Teatro San Carlo in Lisbon. In Italy she alsways sang only on the best opera stages.

Popovici by Stampanoni
Posted by Ashot Arakelyan at 4:59 PM 1 comments 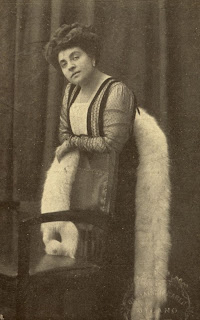 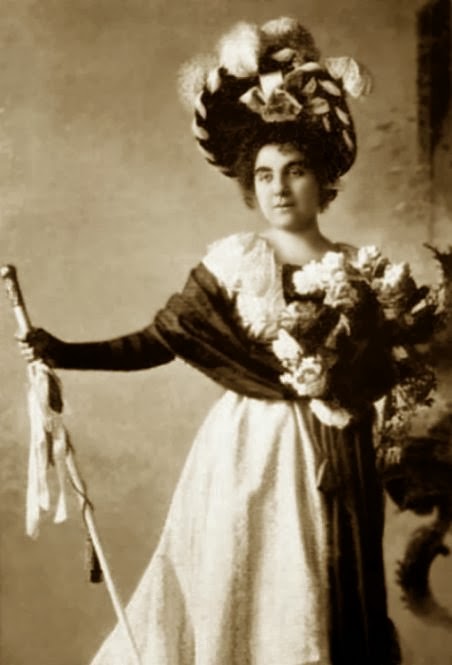 She received her education at the Accademia di Santa Cecilia in Rome. There she studied with Zaira Cortini Falchi. She made her debut in 1899 at the Teatro Grande in Brescia in ‘’La Gioconda’’ followed by ‘’Il trillo del diavolo’’ by Stanislao Falchi. In 1900 she performed ar the Teatro Giglio in Lucca as Tosca in Puccini’s opera of the same name. Already in 1900 she came to the Milan's La Scala where she appeared in ‘’Tristano e Isotta’’ with Giuseppe Borgatti. At the same theatre, on 11. 3. 1902, she sang in Alberto Franchetti's ‘’Germania’’ world premiere together with Enrico Caruso and Mario Sammarco. In 1908 she guested at the Teatro Colón in Buenos Aires. In 1903 she sang Desdemona in Tamagno’s last performance of Otello at the Teatro Argentina in Rome. After she had married a Sicilian doctor, she finished her career, but in 1914 again sang at Scala as Isolde in ‘’Tristano e Isotta’’ under Toscanini. In 1916 she accepted an engagement in Madrid appearing in ‘’La Gioconda’’, ‘’Tristano e Isotta’’ and ‘’La Walkiria’’. After her daughter's death she retired from the stage and later lived in Palermo. 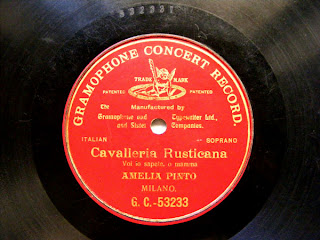 Pinto by Stampanoni
Posted by Ashot Arakelyan at 12:38 AM 1 comments 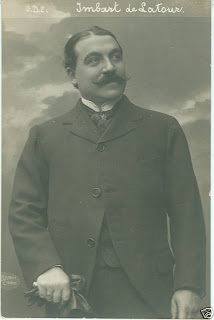 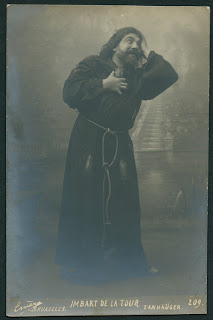