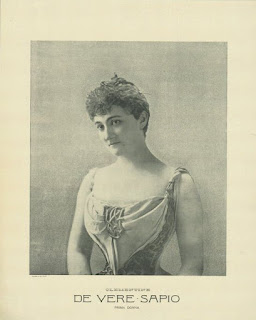 She made her debut in Florence, and also sang in France and Germany. Her extensive American career included a period from 1895 to 1900 when she appeared regularly at the New York Met. Her roles there included Verdi (Violetta, Gilda); Bizet (Micaëla); Wagner (Elsa) and Halévy (Rachel). She had an extensive career in Britain, particularly as leading soprano with the Moody-Manners company. This included several tours to Scotland in which her repertoire included Verdi (Aïda), Wagner (Elisabeth, Elsa), Meyerbeer (Valentine), Halévy (Rachel), Puccini (Mimì) and Gounod (Marguerite). She appeared as Thirza in the British stage premiere of Ethel Smyth's Wreckers, conducted by Beecham (Her Majesty's, London, 1909). In Scotland she also sang extensively in concert (Israel in Egypt in Kirkcaldy 1906) and concert performances of opera (‘’Tannhäuser’’ and ‘’Lohengrin’’ in Perth). She was married to the pianist-conductor Romualdo Sapio. 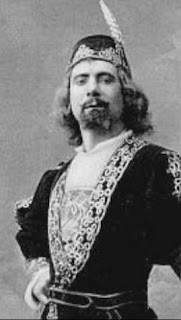 He studied singing in his native city with Cecilio Manfredi. He made his professional opera debut in January 1900 as the "messenger" in Giuseppe Verdi's ‘’Aida’’. He spent the next eight years performing mainly comprimario roles in major opera houses in Italy, including La Scala in Milan and the Teatro di San Carlo in Naples. He also made appearances at the Royal Opera House in London. He  joined the roster of singers at the Metropolitan Opera in the fall of 1908. He made his debut with the company on 16 November 1908. He remained with the company for 30 season, giving his last appearance with the company on 9 April 1938. During those years he also appeared as a guest artist in operas, recitals, and concerts in Europe, South America, Australia, and Africa. At the Met he sang in the world premieres of several operas, including Giacomo Puccini's  ‘’La Fanciulla del West’’ (1910), Umberto Giordano's ‘’Madame Sans-Gêne’’ (1915), Charles Wakefield Cadman's ‘’Shanewis’’ (1918), Puccini's ‘’Il tabarro’’ (1918), Puccini's ‘'Gianni Schicchi’’ (1918), Albert Wolff's ‘’L'oiseau bleu’’ (1919), and Deems Taylor's ‘’Peter Ibbetson’’ (1931). After retiring from the Met, he returned to Novara where he built a large home and lived quietly. He died after a brief illness three years later in his native city. He is buried in the Novara Cemetery. 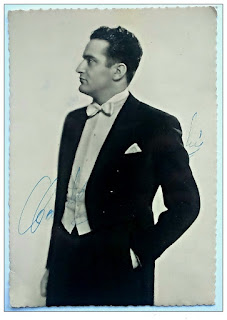 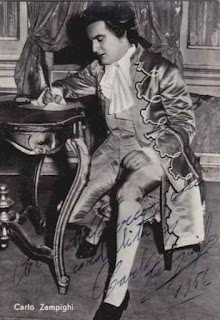 First he studied singing under Baldoni in Forli, then at school of Marchesa Cavalli-Foschi in Rome. Later he perfected his vocal at the Centro Lirico in Firenze. In 1951 Magda Oliviero provided his stage debut at the Teatro Duse in Bologna. In 1951 he had a huge success at the Teatro Margherita in Genua. In 1958 he sang at the Maggio Musicale Fiorentino in Firenze in G. Rossini’s ‘’La Donna del lago’’. In the 1956-1959 seasons he appeared with great success in the USA, where among other things at the Dallas Opera he sang the part of Almaviva in ‘’Il Barbiere di Siviglia’’ opposite Maria Callas. He made guest appearances in Egypt, Spain (Barcelona, Madrid, Bilbao, Seville, Oviedo), Zurich, Berlin (State Opera), Belgium (Brussels, Ghent), Buenos Aires (Teatro Colon),  New York, Cincinnati, New Orleans and London. In 1966 he retired from the stage and taught singing. 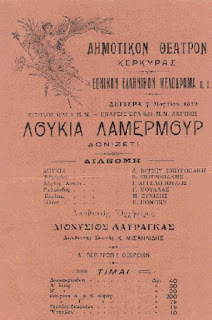 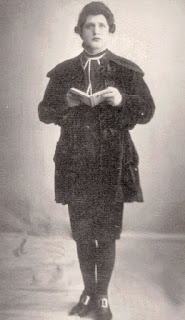 First he studied singing with N. Kokkinos and Tim Xathnopoulos. From  1918 to 1920 he continued his education under Nina Foka at the Athens Conservatory. He made his debut as Cavaradossi in ''Tosca'' at Attikon in Piraeus. He continued his studies in Milan under Giuseppe Borghi (1920-1924). In Italy he appeared with great success in famous operatic stages. After his return in Greece (1924), he appeared as Duke in ‘’Rigoletto’’ opposite Yiannis Angelopoulos. In the interwar period he sang in performances of the Elliniko Melodrama (Greek Melodrama): ‘’The Mother’s Ring’’ (1928, 1931), ‘’O protomastoras’’ (1930), ‘’Il barbiere di Siviglia’’ (1930, as a partner of Elvira de Hidalgo), ‘’Don Pasquale’’ (1931) etc. From 1941 to 1959 he was a principal tenor of the Greek National Opera. His repertoire included Almaviva in ‘’Il Barbiere di Siviglia’’, Alfredo  in ‘’La Traviata’’, De Grieux in ‘’Manon’’,  Edgardo in ‘’Lucia di Lammermoor’’, Ernesto in ‘’Don Pasqaule’’ etc.

Posted by Ashot Arakelyan at 11:14 AM 0 comments