She had a short career. Probably she made her debut in 1920 at the Teatro Colon of in Wagner’s ‘’Walkure’’.

Posted by Ashot Arakelyan at 8:53 AM 0 comments

Probably he appeared at the italian provincial opera houses

Posted by Ashot Arakelyan at 8:35 AM 0 comments 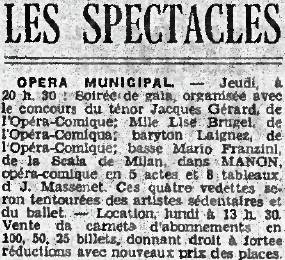 Probably in the early 1930’s he sang at the Teatro alla Scala. In 1942 at the the Grand Théâtre de Tours he appeared in  ‘’Faust’’ and ‘’Tosca’’. In 1943 he sang at the  Opéra de Monté-Carlo in Bizet’s ‘’Carmen’’. In 1945 he performed at the Opera-Comique in Gounod’s ‘’Faust’’. Two years later at the same opera house he appeared in Puccini’s ‘’Boheme’’ as Colline. He made two records for

Posted by Ashot Arakelyan at 10:41 AM 0 comments 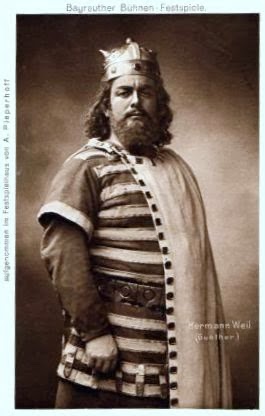 First he wanted to become an elementary school teacher, but then studied music science, theory and directing at the conservatoire of  under Felix Mottl; he received his vocal education by Adolf  Dippel in  a. M. In 1901 he made his debut at the Municipal Theatre of Freiburg in the part of Wolfram in Wagner’s ‘’Tannhäuser’’. From  he joined in 1904 to the Stuttgart Court Opera. Here he performed with great success till 1933. He sang in  among other things in the premiere of the opera ‘’Princess Brambilla’’ of Walter Braunfels (25. 3. 1909) and in the premières of the operas ‘’Salome’’ (1905 as Jochanaan) and ‘’Elektra’’ (as an Orest) of Richard Strauss and "Der arme Heinrich"  of Hans Pitzner. In 1909 he made guest appearances in appearing as Sebastiano in  "Tiefland" of E. d'Albert, and as Kurwenal in ‘’'Tristan und Isolde’’ (1911). In the 1912-14 seasons he sang at the Boston Opera House. Since 1911 he appeared at the Metropolitan Opera in . In 1913 he took over at the Metropolitan Opera in the première of the Faninal’s "Rosenkavaliers". After the  had entered into the First World War, he was interned from 1917-19 in  as a German. In 1919 he sang as a memeber of opera troupe put together from German singers at the Lexington Theatre in . At the Bayreuth Festival he was a celebrated interpreter of Wagner's operas; here in the season 1911-12 he appeared in ‘’Parsifal’’, "Meistersingern", "Götterdämmerung" and from 1924 to 1925 the part of Hans Sachs in "Meistersingern". In the 1920-23 seasons he was active at the Vienna State Opera. From 1923 to 1924 with the German Opera Company he went to sing in . In 1939 he forced to leave  and then lived in  as a singing teacher. His stage repertoire contained more than hundred roles and culminated in the Wagner's parts of Hans Sachs and the Kurwenal in ‘’Tristan und Isolde’’. 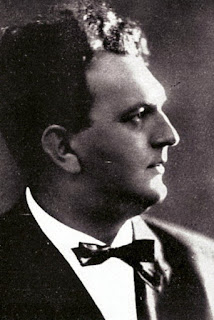 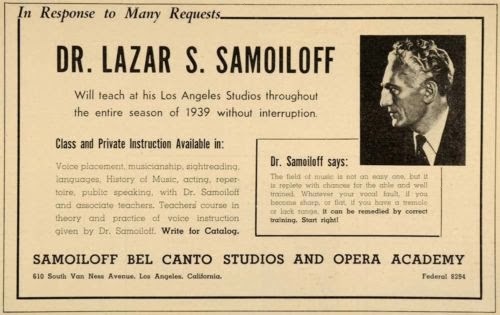 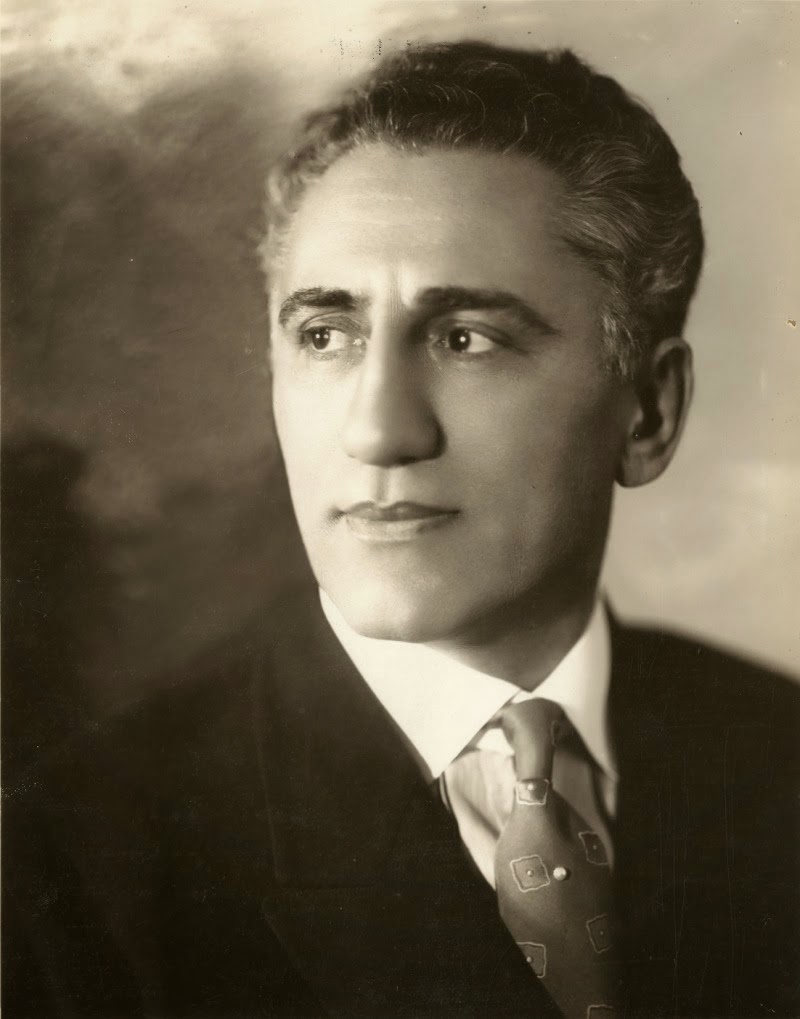 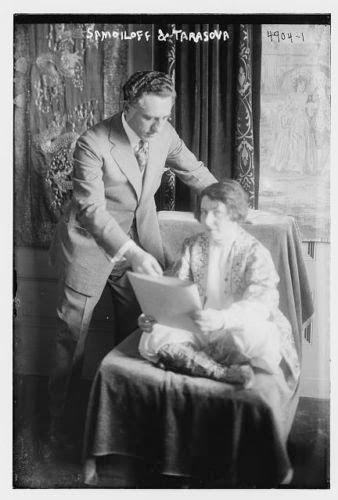 His real name was Lazar Samoilovich Kvasha. He studied singing under Camillo Everardi at , then at the Vienna Konservatorium. Later he additionaly received vocal education in  by Augusto Brogi. In 1901 he made his debut at the Opera House of Kharkov, where he sang till 1903. Then he appeared at the opera houses of ,  and . Then he lived in , but by advice of Feodor Chaliapin went to live in  and worked there as a vocal pedagogue. Later in San Francisco Samoiloff opened private singing School. 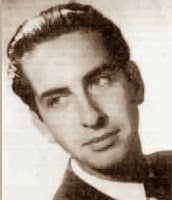 When he was 16, he decided he wanted to be a singer, and began studies with the baritone, Holger Bruusgaard. He enlisted in the Danish army at 18; after discharge in 1938, he went to to study with Giuseppina Finzi-Magrini and stayed with her for more than a year. While in Italy, he hoped to be able to perform, but his Jewish name didn't  make things easier, so he used the name Francesco Dammarchi, and although he was invited to sing by an Italian touring company that was going to Nice, this fell through because of the increasingly bad relations between Italy and France, and a recording venture evaporated because war broke out. Rabinowitz returned to  in 1939 and finally got to make a few recordings. He was hoping to get a contract with the Royal Opera, but although he was accepted for a debut performance after an audition, this never happened. Finally, out of despair, his father paid for a concert with the Copenhagen Philharmonic, which had to be postponed because Frantz caught the flu, but did take place on April 1, 1940, and was a huge success. Eight days later German troops occupied , and it did not portend a hopeful future for a young Jewish singer. However, Frantz finally got his break, being invited to sing Marcello (42 performances in all) with a troupe touring  with ‘’La Boheme’’. Based on his success in this, he finally was invited to sing at the Royal Opera, and made his debut there on April 17, 1941, again as Marcello, but it was another year before he got another such opportunity. He had to satisfy himself with giving a few more concerts. In October, 1943, he fled to  to escape the Nazi roundup of Danish Jews to be sent to concentration camps. He gave a few concerts there, and was well received, but in March, 1944 he joined the Danish Brigade in and was with them when they returned to  in 1945. His concert career began picking up, and he even got to sing two more performances at the Royal Opera, but Frantz's unlucky star still hovered over his head. Based on a screen test he took for a Hollywood film with Deanna Durbin, he came to the  in 1946, but ended up sweeping floors to make a living. However, toward the end of 1946, Rabinowitz began to get concert engagements, using the name Frank Wennerholm. It was even thought that he had a chance for an engagement by the Met, but nothing ever came of this either. After a year in the , Frantz had still not sung in an American opera house, except for some concert performances as Scarpia in Tosca at Carnegie Hall. He did sing Amonasro in Aida at a semi-staged performance in , but otherwise he sang concerts only in minor cities at music schools, colleges, music clubs and with amateur orchestras. Returning to in 1948, he was again foiled in his hope to sing at the Royal Opera, which had no time to hold rehearsals with a guest. He did, however, give a concert at the Tivoli Concert Hall in July, 1948, but this was to be his last. While visiting in , he became ill and died at the age of 30 on Aug. 28, 1948 from complications following an appendicitis operation. Rabinowitz's unlucky star was with him until the end. 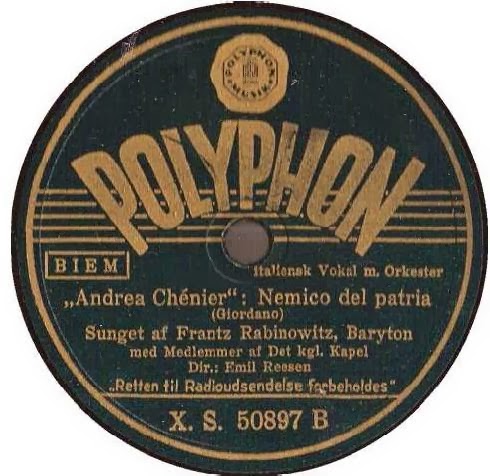 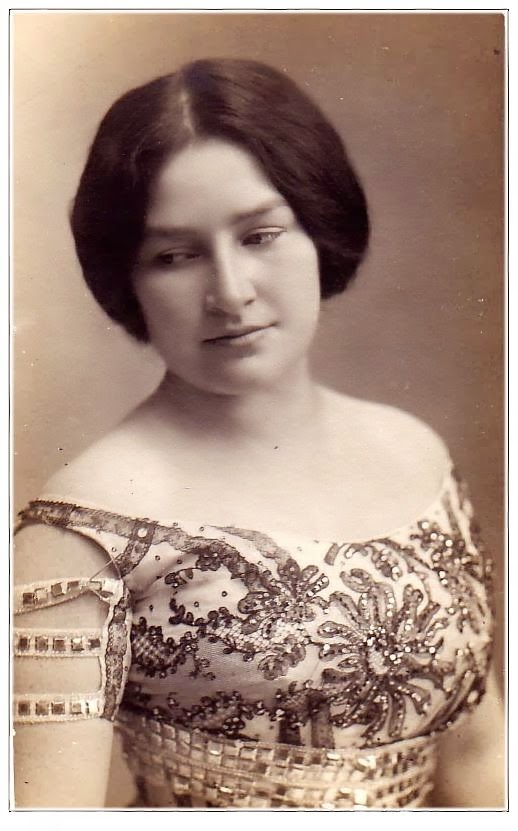 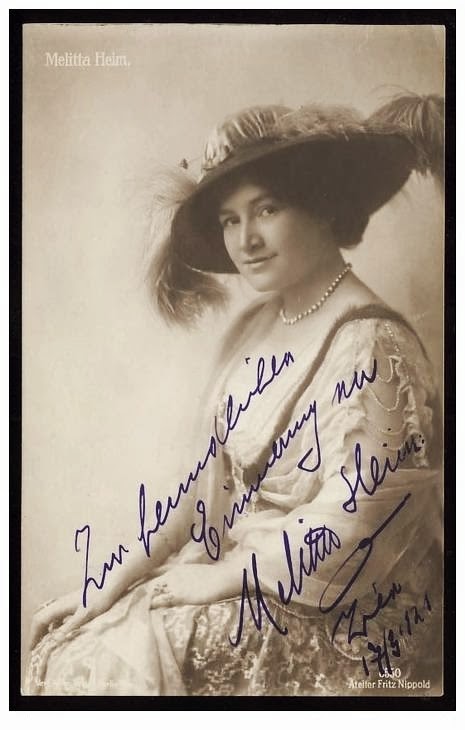 She studied singing under Johannes Ress in  and made her stage debut in 1909 at the Municipal Theatre of Graz as Gilda in ‘’Rigoletto’’. In 1911, after a successful guest performance in ‘’Traviata’’, she was engaged by the  a. M., to which she belonged till 1916. Several times she made guest appearances at the Vienna Court Opera as well as in 1912 and 1914 as Queen of the Night in ‘’The Magic flute’’ at the    in . In the 1917-22 season she had at the Vienna State Opera a huge success. She suffered a nervous breakdown and forced to retire from  the stage in 1922. She appeared then at the concert hall. In 1938 together with her mother she went to . In  she was active as a singing teacher. 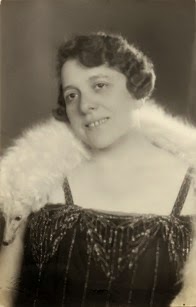 She made her debut in  in 1909 and came to the Berlin Municipal Opera in 1913, remaining there until 1934. She was a particularly noted Wagnerian interpreter, and sang at the Bayreuth Festivals (1927-30). She was also a guest in  in 1928, and had one of her greatest successes in 1930 at the Theatre des Champs-Elysees in , singing Brünnhilde in the Ring cycle. It was at this time our Wagner excerpt with her was recorded. Since she was Jewish, she could not appear in  after 1934, although she continued to live in . She was later seized by the Nazis and put into a concentration camp, where she died in 1943. 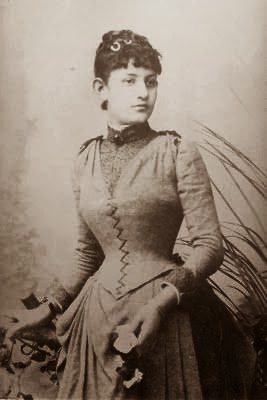 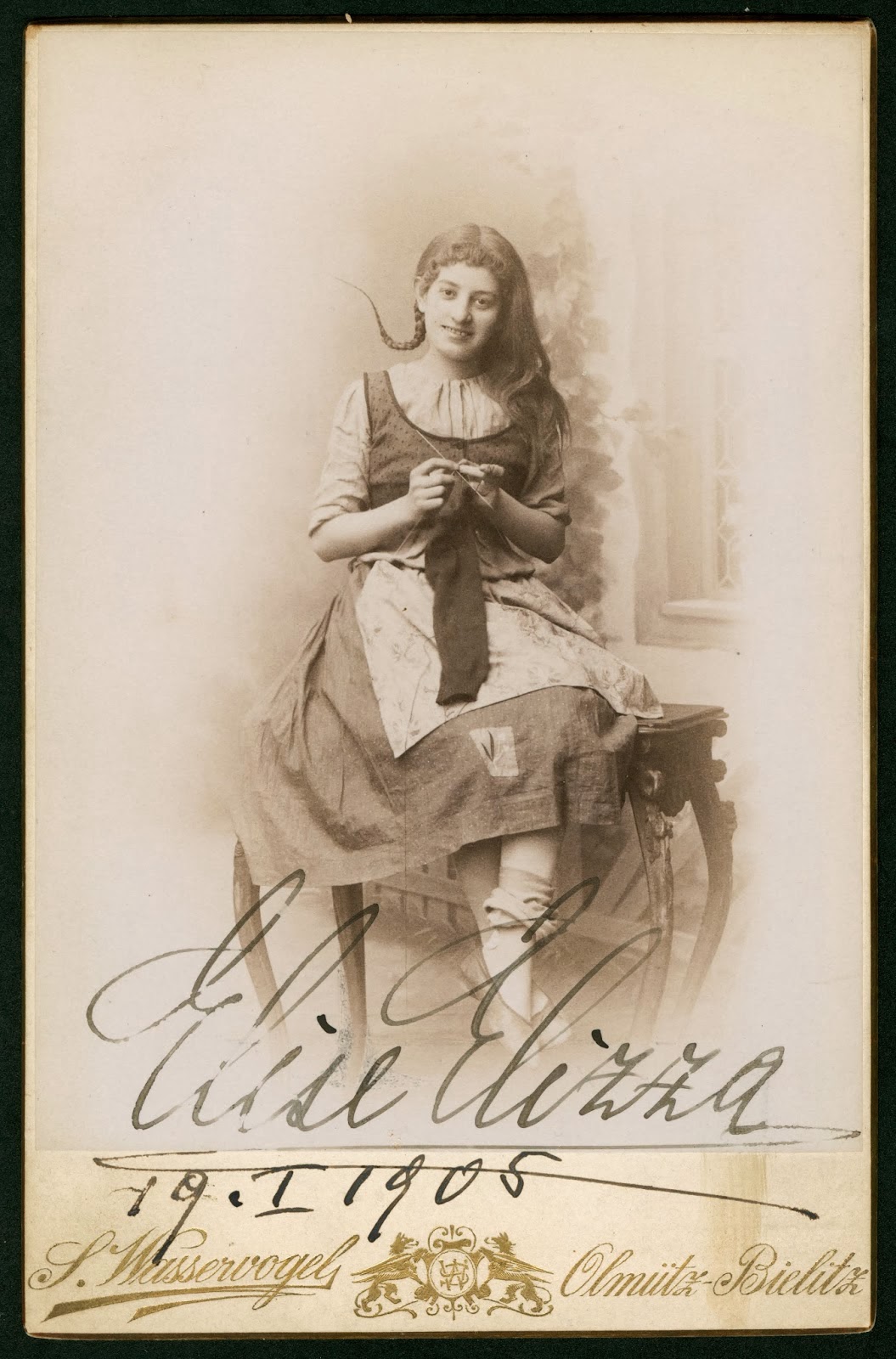 Her real name was Elisabeth Letztergroschen. She studied singing under Adolf Limley in , whom she married  later. Her teacher in  was Adolf Limley, who became her husband. She sang first in operetta, then joined the opera company at  in 1894. The following year she made her debut, as Inès in ‘’L'Africaine’’ at the Vienna Staatsoper, where she remained as a valued and versatile member of the company until 1919. In 1904 she made guest appearances at the German Theatre of  and in Brünn (1912). Beside her work on the stage she was a respected concert singer; in 1901 she appeared in the premiere of the ‘’Das klagende Lied’’ of Gustav Mahler.Her roles there ranged from the Queen of Night to Brünnhilde, though she was probably happiest in the lyric-coloratura repertory, such as Violetta and Marguerite de Valois in ‘’Les Huguenots’’. She later taught in , where Lotte Lehmann was among her pupils. A prolific early recording artist, she reveals on records a voice of exceptional beauty with a highly accomplished technique and a sensitive style. 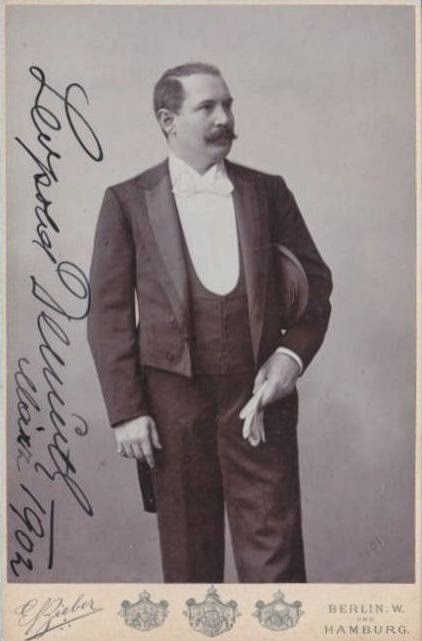 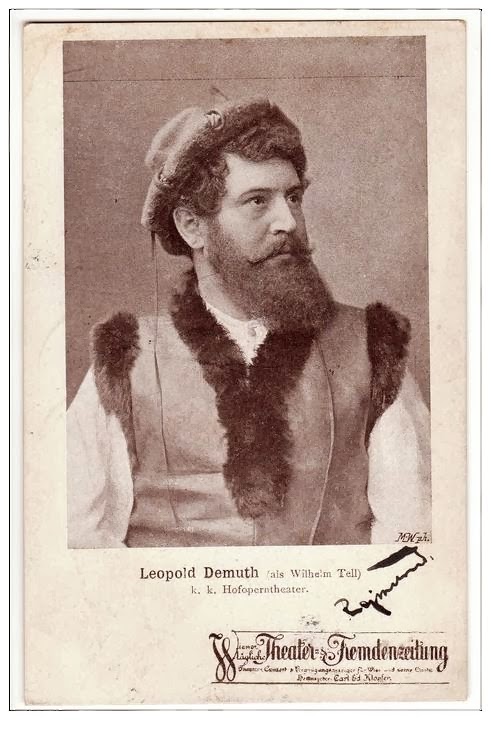 His real name was Leopold Pokorny. His voice was discovered during his military service. He studied singing with Joseph Gänsbacher in  and made his debut in 1889 at the Municipal Theatre of  Halle ()  in ‘’Hans Heiling’’ of Marschner. In the 1891-96 seasons he sang at the Opera House of Leipzig, from 1896-98 Demuth appeared at the Municipal Ttheatre of Hamburg. In 1898 he was engaged by the Vienna Court Opera, where his career reached the climax. On 2. 1. 1908 he sang there in the premiere of the opera ‘’Ein Wintermärchen’’ of Goldmark. In the same year he took over at the  première of d'Alberts ‘’Tiefland’’. Already in 1904 he performed at the Vienna Court Opera in an unforgettable performance of Gluck’s ‘’Iphigenie in ’’. He made guest appearances at different German and Austrian opera houses. Thus he sang in the Wagner-Festspielen of  (1903 and 1905), at the Berlin Court Opera (1897), also in Frankfurt a. M.,, ,  and at the German Theatre of  (1907). In 1899 he appeared at Bayreuth Festival the role of Hans Sachs in ‘’Meistersingers’’ and the Gunther in ‘’Götterdämmerung’’. He was married with actress Eugenie Lenau, who was engaged temporarily by the German theatre in . He was one of the best baritones of his time.