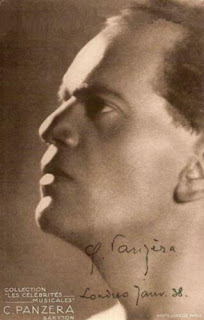 Charles Auguste Louis Panzéra. He volunteered during the First World War in the French army and was twice wounded. Then he studied singing at the Conservatoire National in Paris. He made his debut in 1919 at the Opéra-Comique in Paris as Albert in "Werther" by J. Massenet. Gabriel Fauré dedicated his song cycle "L'Horizon chimérique" to him. He was generally considered one of the greatest song interpreters of his time. Concert tours have brought him brilliant success in the music metropolises in Europe as well as in America. He had a cordial friendship with composers such as Arthur Honegger, Darius Milhaud, Albert Roussel, Vincent d'Indy and Guy Ropartz. He was also a great interpreter of the German art song from Schubert to Hugo Wolf and sang classical vocal works by Lully, Rameau, Handel, J. S. Bach and other masters. Since 1926 he gave a recitals every year in England and Holland. On stage, he appeared only rarely, mostly as Pelléas, which he sang in Amsterdam and Florence. During his recitals, he was often accompanied by his wife, the pianist Magdeleine Panzéra-Baillot. In 1956 he finished his concert career. After teaching intermittently at the Juilliard Music School in New York, he worked as a vocal teacher in Paris since 1946 and in 1951 he was appointed as professor at the Conservatoire National de Paris, where he served until 1966.

Posted by Ashot Arakelyan at 10:26 AM 1 comments 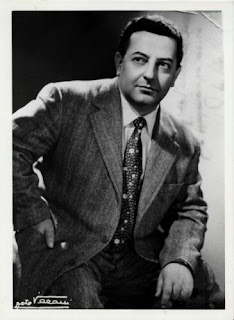 He was trained by Morini in Rome and began his career in 1934. He reached the peak of his career after the Second World War, when performed at the leading Italian stages as heroic tenor. He sang at the festivals of Florence, Verona and in the Roman Baths of Caracalla and gave guest performances especially on French operatic stages. He appeared at the Opéra National de Lyon and at th Opéra National de Bordeaux (1959) and from 1957 to 1963 at the Opéra de Marseille, also in the 1961-1962 season sang at  the Teatro San Carlo in Napoli.

Posted by Ashot Arakelyan at 9:55 AM 0 comments