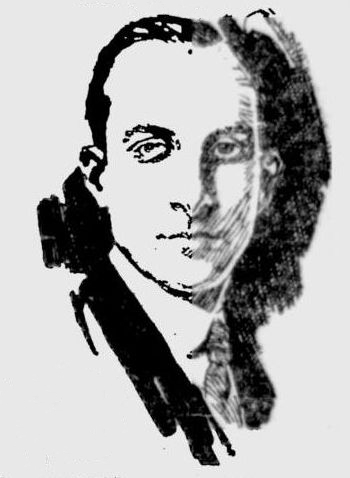 He sang as a child in a boy's choir at , then studied law at the . He distinguished himself there also as a sportsman and sang at the University Glee Club. During the holidays at his voice was discovered and he studied singing under Anna Schoen-Rene. In the 1907-08 season he made his debut at the Opera House of Leipzig as Steuermann in "Fliegenden Holländer". His concert debut was happened in 1908 at . In 1910 he was engaged by the Court Theatre in ; here he sang on 25. 10. 1912 in the premiere of Richard-Strauss’s opera ‘’Ariadne auf ’’ in  the part of Scaramuccio. Also as a concert singer he was very successful. In 1913 he sang at in ‘’Lied von der Erde’’ of Gustav Mahler under Willem Mengelberg, the same year he appeared in the tenor part in Haydn’s ‘’Schöpfung’’ in in presence of the deutsch emperor Wilhelm II. in 1913 he took over in in  ‘’der Matthäuspassion’’ of J. S. Bach. Although he was an American, he could continue after the entry of the into the First World War in 1916 his career in . Thus he sang there in 1917 in the premiere of S. Wagner’s "An allem ist Hütchen schuld". Till 1919 he remained at and then returned to the . In 1919 he gave there the first concert at the Aeolian Hall  in . In 1920 he sang at in concert dedicated to the 150-th birthday of Beethoven. In 1921 he was engaged by the Metropolitan Opera at , where he sang till 1932. His beginning role at the Metropolitan Opera was the Victorin in the première of Korngold’s "Toter Stadt" (1921). He estimated himself especially as Tenor Buffo (David in "Meistersingern"). In 1922 he performed in the late première there of the Mozart's opera ‘’Così fan tutte’’ in the role of Ferrando. In 1922 he sang in the première of Rimsky-Korsakov’s ‘’Snow Maiden’’. In 1924 he sang at the guest performance of the Metropolitan Opera at again the role of Ferrando in ‘’Così fan tutte’’. He appeared as a guest at and and gave 1926 song recitals at . After he had achieved a great success in 1931 in the operetta ‘’Boccaccio’’ of Suppé as a partner of Maria Jeritza, he completely turned to the operetta and became known at the New York Broadway. He appeared also in some Hollywood movies, among other things in ‘’The Great Caruso’’ and sang as a soloist at the in . Later he lived at .

Posted by Ashot Arakelyan at 7:07 PM