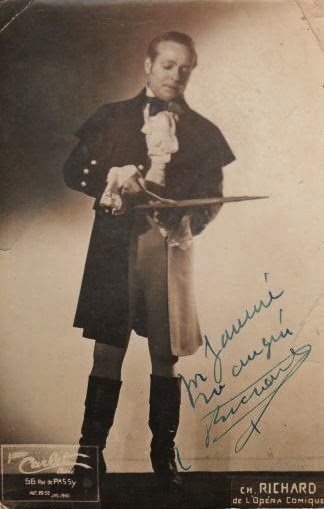 
The child of American parents, Charles Richard grew up in England and after brief voice training began singing in variety in France. He then turned to operetta and eventually moved into opera at the end of the 1930's. He appeared in various houses in the French provinces, sang from 1943 to 1945 at the Opera in Marseille and in 1945 was invited to the Opéra-Comique in Paris, where his debut was as des Grieux in Massenet's ''Manon''. He remained one of the leading tenors in the house until 1956, specializing in the French and Italian repertoire including Vincent in ''Mireille'', Wilhelm Meister in ''Mignon'', Gérald in ''Lakmé'', Jean in ''Le jongleur de Notre Dame'', Alfredo in ''La traviata'', Rodolfo in ''La bohème'', Pinkerton, Cavaradossi, and the title rôle in ''Werther''. He continued to make guest appearances, including the Opera at Monte Carlo in 1947 (as Nicias in Massenet's Thaïs), in 1950-51 at the Théâtre de la Monnaie in Brussels, and also in the major houses in the French provinces. He frequently took part in opera productions on French radio.

Posted by Ashot Arakelyan at 11:29 AM