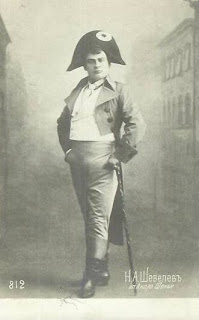 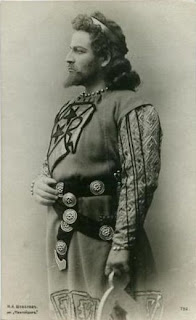 His real surname was Shevelyukhin. He was born into a family of tailor. Shevelev greduated from the Kiev actual school. By taking a great interest in theatre, secretly from his parents in 1881 Shevelev has performed in the Ukrainian troupe (here appeared in vaudevilles and divertisments). As a member of this troupe he went on tour on cities of a province, as well as in St. Petersburg where incidentally his voice has heard italian singer Zanetti and began to give him free lessons of singing. In the end of 1880th Shevelev sang in chorus, later he studied with baritone Antonio Cotogni and from 1889 to 1896 with the tenor Leopoldo Signoretti. In 1901 he took lessons from Pauline Viardot-Garcia, then in Tbilisi he studied also with Eugene Ryadnov. In 1896 at the Moscow Private Opera Theatre of  S. Mamontov Shevelev made his debut in N. Rimsky-Korsakov’s opera  ‘’Snow maiden’’. He performed in this theatre up to 1901 and from 1903 to 1905. From 1897 to 1900 and in 1902 he sang in Perm. From 1901 to 1902 he sang in Kiev, in 1905 in Nizhny Novgorod, in 1902 and from 1906 to 1908 he appeared in St. Petersburg, from 1908 to 1913 and from 1922 to 1924 Shevelev performed at the S. Zimin’s Opera Theatre. During of his career from 1913 to 1919 Shevelev also sang in Moscow, at National House of St. Petersburg, in the provincial theatres (Irkutsk, Tomsk, Tyumen, Taganrog, Sukhumi, Orenburg, Chita, Tbilisi, Odessa), from 1919 to 1922 he was a soloist of the Tbilisi Opera Theatre. Shevelev sang  also in Italy, Germany, Japan, China, Austria and in North and South America.

Posted by Ashot Arakelyan at 11:21 PM