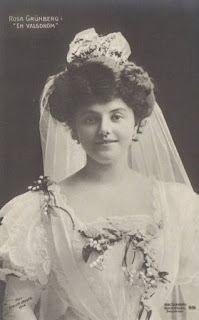 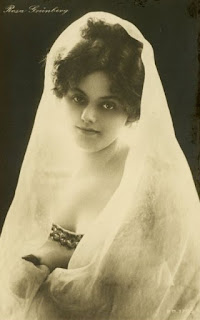 She was a pupil of pedagogues J. Jacobsson, Gillis Bratt and Signe Hebbe in . In 1898 she made her debut at the Svenska Theater in as Inga in ‘’Bröllopet på Ulvåsa’’, a few weeks later she sang at the Vasatheater of Stockholm in ‘’Opernball’’ by Heuberger. In the 1898-1902 seasons she appeared with great success at the Vasa Theater in . In the 1902-1904 seasons she sang at Östermalmstheater in and undertook a tour with the Ranfts Operetta troupe through the Scandinavian lands. Her repertoire also included the title part in J. Offenbach’s ‘’Schöner Helena’’ and Rosina in ‘’Il Barbiere di Siviglia’’. In the 1906-1914 seasons she was a star of the Oscartheater in . She was invited to appear at the Royal Opera in , and there in the 1914-1915 season she had a huge success as Leonora in ‘’Il Trovatore’’ and as Santuzza in ‘’Cavalleria Rusticana’’. She retired from the stage in 1916.

Posted by Ashot Arakelyan at 4:09 PM