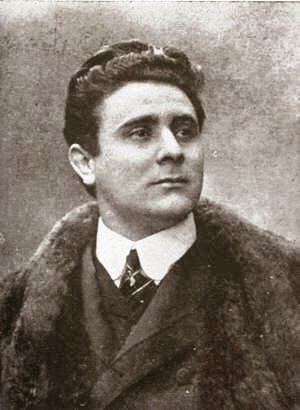 In 1902 he performed at the Tetro Nicolini in his native Firenze where he sang as Arturo in ‘’I Puritani’’ of Bellini as a partner of  Luisa Tetrazzini. In 1903 he guested at the Teatro Petruzzelli in Bari, in 1904 at the Teatro Massimo in Palermo; here he sang as Turiddu in ‘’Cavalleria rusticana’’ (as a partner of Eugenia Burzio and Pasquale Amato), Edgardo in ‘’Lucia di Lammermoor’’ and Almaviva in ‘’Il Brbiere di Siviglia’’ (with Maria Barrientos). In 1915 he was  again sang in this house, now as Cavaradossi in ‘’Tosca’’. I n 1905 he appeared at the Teatro Costanzi in Rome as Hoffmann in ‘’I racconti di Hoffmann’’, in 1906 he guested with an Italian opera troupe in St. Petersburg and Moscow where he performed as Duke in ‘’Rigoletto’’. In 1910 he sang at the Teatro San Carlo in  Napoli as Milio in ‘’Zazà’’ of  Leoncavallo. In 1916 he performed for a season at the opera in Havana (among other things in ‘’La Traviata’’, ‘’Lucia di Lammermoor’’ and in ‘’La Sonnambula’’ as a partner of Amelita Galli-Curci), in 1917 again at the Teatro Costanzi in Rome as José in ‘’Carmen’’, as Pinkerton in ‘’Madame Butterfly’’ and as Dick Johnson in Puccini’s' ‘’La Fanciulla del west’’. In 1924 he appeared in Holland as a partner of the famous Gemma Bellincioni in ‘’La Traviata’’ and in ‘’Carmen’’.