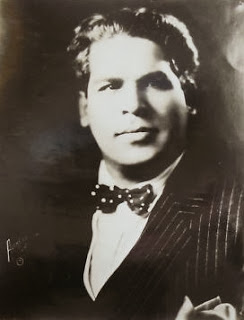 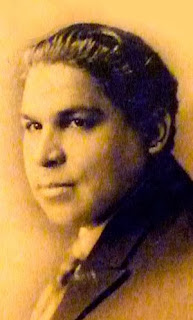 Manuel Maria Daniel Francisco de Paula Salazar Zuniga. Luckily for us, the baby that was baptized with this incredibly long name is currently known as Melico Salazar. Melico is the most renown Costa Rican artist of all times. He was born in January 3, 1887, son of Nazorio Salazar and of Rafaela Zuniga. His house was located only a block away from the National Theater, which is why he’s said to have been born under the awnings of the theater.
In 1896 his family moved to Cartago, where they stayed for fourteen years. Melico had a prodigious talent for singing, and he took the train into San Jose every week in order to participate in the rehearsals of the choir in the Colegio Seminario. The young boy then enrolled in the Escuela Santa Cecilia de Musica, which was inaugurated in 1894 in order to replace the Escuela Nacional de Musica. The Santa Cecilia school boasted amazing professors and artists, such as Melico’s mentor, Joaquin Vargas Calvo. Salazar’s talent was so apparent to his teachers that they encouraged him to sing in several places and for many occasions. The first written praises of the young artist appeared in the newspaper “La Aurora” on december, 1904: “There has been a great revelation tonight for the audience. Seventeen year-old Tenor Manuel Salazar. His voice is potent and solid, worthy of all praise”. After this and many other favorable reviews, Salazar’s local fame expanded, taking him to all of the provinces to perform in churches and schools. This young artist’s career wasn’t meant to be limited to national praise, though.
On February 6, 1907, twenty year-old Salazar traveled to Italy with a meager $84 in his pocket. Here he stayed in Milan, where he studied with important teachers such as Castegnaro and Conrado. After studying with Gala Moretti in 1911, his international triumphs began. In 1914 he met and married his wife, Angiolina Viassone Cantero, from Turin. Angiolina or Lina as he called her, was introduced to Melico by another singer and she became her husband’s most ardent supporter. In theaters where nobody was allowed to remain backtsage, Lina would stand or sit through her husband’s performance and hold a pitcher of coffee that he drank during breaks. During the 1910’s and 1920’s his international presentations increased, as did his fame and recognition. Salazar traveled with his wife and members of different operas to Cuba, Central America, Venezuela, Peru, Brazil, Mexico and North American cities. He also visited European cities such as Barcelona, Moscow, Leningrad, Riga and Berlin. Among Salazar’s legendary performances are: the Inauguration of the Rodak theater in Rochester in 1922, his debut in the Metropolitan Opera of New York in 1924, and his participation in the Aida Opera performed in the Polo Ground in 1937. In 1937 Salazar was ready to return to Costa Rica.
Melico Salazar’s brilliant career was at its apogee or greatest height from 1917 to 1930. In 1940 however, the great tenor hardly performed, except for very special occasions and upon the request of important figures. Fortunately for Costa Rica and for all of its aspiring young singers, the National Conservatory was founded in 1941. Melico Salazar, who was and still is Costa Rica’s greatest singer was stepping down, but new talents were rising , due mostly to the Conservatory’s opening.
In 1947, Melico Salazar announced his support to President Calderon Guardia, but since the latter lost in the Civil War of 1948, this cost the artist dearly. His pension was suspended by the Figueres government and Salazar wasn’t supported economically or morally until many years later. After returning to San Jose (he had been living in Cartago), Melico Salazar Zuniga, the greatest Costa Rican singer of all times, died in poverty on August 6, 1950. The man who had received innumerable applause and praise in theaters from all over the world, wasn’t appropriately honored by the Costa Rican government until 1972, when a statue of his was inaugurated in Cartago. Later, in 1979, a project was passed in order to name the old Teatro Raventos, Teatro Melico Salazar, a name which it still holds today. As is the case with most great artists, Melico had to wait until after his death to be remembered and to be immortalized. - http://www.infocostarica.com/people/melico.html 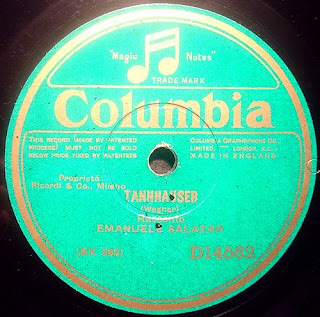 Posted by Ashot Arakelyan at 12:18 AM