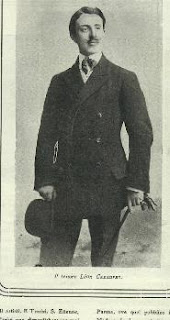 In 1905 he appeared at the Teatro Costanzi in  Rome in ''I racconti di Hoffmann'' of Offenbach with Maria Farneti (Antonia/Giulietta), Amelia Karola (Olimpia), Luisa Garibaldi (Nicklausse/madre) and Angelo Scandiani (Coppelio/dr.Miracolo/Dappertutto). Next year  he sang in Teatro Regio of Parma as Werther with Elisa Petri (Carlotta), Giuseppe Giardini (Alberto) and Silvio Becucci (Johann). In 1907 was hired for the Manhattan Opera by Hammerstein in 1907 for Les Contes d’Hoffmann and Thaïs, but was replaced in both by Charles Dalmorès, who supposedly learned the tenor roles in two weeks. It appears that Mr. Cazauran visited the Bronx Zoo Monkey House and got into the same trouble there as had Caruso a short time earlier (accused of pinching a woman’s derrière). He was, as was Caruso, acquitted, but Hammerstein decided to get rid of him anyway.

Something curious seems to be going on with opera tenors in the monkey house at New York’s Central Park; perhaps there’s an atmosphere that lends itself to “annoying” people, for the problem of mashers at the monkey house has even inspired a 1907 movie by Biograph.

Luckily, Detective J.J. Cain is on the lookout for malefactors who make lewd advances, having arrested Enrico Caruso the year before.
Cain’s latest arrests are Leon Cazauran, “a slender young man with pale face and large brown eyes” brought to New York to sing in “Thais” at Oscar Hammerstein’s Manhattan Operahouse, and his companion, Claude Modjeska, “a copper-colored young man,” The Times says.

“The charge against both was that of attempting to corrupt the morals of little boys,” The Times says. Cain said he was suspicious of the men because they had visited the monkey house several times before “in the company of small boys.”

Despite the language handicap (Cazauran didn’t speak English and while Modjeska only knew a bit of English, he was able to act as a translator) the men protested their innocence. Modjeska was fined $10 and the men vanished.

One of his pupils was french tenor Charles Burles who made his opera debut in 1958 as Almaviva in ''Il Barbiere di Siviglia''. 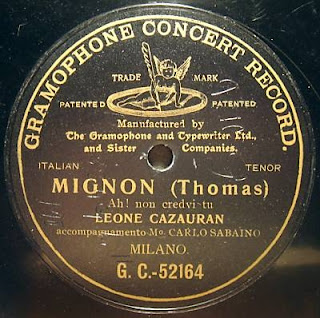 Posted by Ashot Arakelyan at 2:57 PM