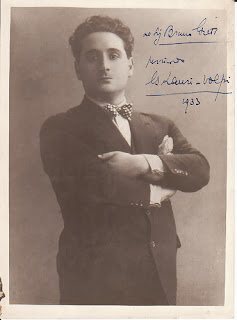 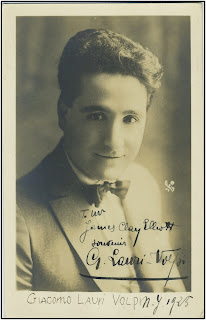 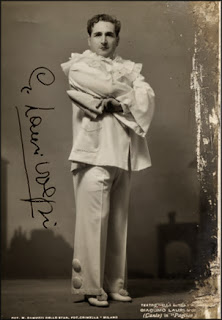 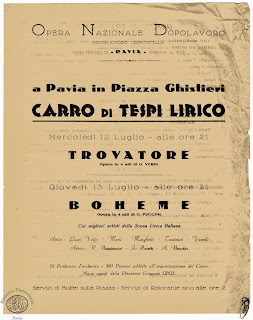 He was an Italian tenor with a lyric-dramatic voice of exceptional range and technical facility. He performed throughout Europe and the Americas in a top-class career that spanned 40 years.
Born in Lanuvio, Italy, he was orphaned at the age of 11. After completing his secondary education at the seminary at Albano and graduating from the University of Rome La Sapienza, he began vocal studies under the great 19th-century baritone Antonio Cotogni at the Accademia Nazionale di Santa Cecilia in Rome.
His nascent singing career was put on hold, however, by the outbreak of World War I in 1914, during which he served with the Italian armed forces. The war over, he made a successful operatic debut as Arturo in Bellini’s I Puritani in Viterbo, Italy, on September 2, 1919—performing under the name Giacomo Rubini, after Bellini’s favorite tenor, Giovanni Battista Rubini. Four months later, on January 3, 1920, he scored another success, at the Teatro Costanzi in Rome, this time performing under his own name opposite Rosina Storchio and Ezio Pinza in Massenet's Manon.
Lauri-Volpi was widely acclaimed for his performances at Italy's most celebrated opera house, La Scala, Milan, between the two world wars. A highlight of his Milan seasons occurred in 1929 when he was chosen to sing Arnoldo in La Scala’s centenary production of Rossini’s Guglielmo Tell.
He was also a leading tenor at the New York Metropolitan Opera from 1923 to 1933, appearing there in a total of 232 performances. During this 10-year period he sang opposite Maria Jeritza in the American premiere of Puccini’s Turandot and opposite Rosa Ponselle in the Met premiere of Verdi’s Luisa Miller. His Met career was terminated prematurely after a dispute with the opera house's management. They wanted him to take a pay cut to help tide the theatre through the economic privations being caused by the Great Depression, but he refused to co-operate and left New York for Italy.
Lauri-Volpi's most notable appearances outside Italy also included two seasons at the Royal Opera, Covent Garden—in 1925 and 1936. By the latter date, he had broadened his repertoire, progressing from lyric roles to more taxing dramatic parts. His voice began to show consequent signs of wear in the 1940s, losing homogeneity. His thrilling top notes remained remarkably intact, however, right through until the 1950s.
During the Second World War, Lauri-Volpi was based in Italy and was particularly admired by the country's dictator, Benito Mussolini. His last public performance in a full opera came in 1959, as Manrico, in a production of Verdi’s Il Trovatore staged at Rome.
Lauri-Volpi recorded a number of opera arias and duets for European and American gramophone companies during the height of his fame. His voice was a brilliant instrument at its zenith: bright, flexible and ringing in tone. He had astonishingly easy and penetrating high notes and possessed a shimmering vibrato which made his voice instantly recognisable both on disc and in the theatre.
He sang roles as diverse as Arturo (in Bellini's I Puritani) and Otello (in Verdi's Otello). In the process, he cemented his position as one of the supreme opera singers of the 20th century, even though he faced stiff competition from a remarkable crop of rival Mediterranean tenors during his prime in the 1925-1940 period. (They included Beniamino Gigli, Giovanni Martinelli, Aureliano Pertile, Francesco Merli, Galliano Masini, Tito Schipa, Antonio Cortis and Renato Zanelli—as well as the young Alessandro Ziliani and Giovanni Malipiero.)
Lauri-Volpi was a cultured, intelligent man with a fiery temperament and firm opinions. He retired to Spain after World War Two and died in Burjasot, near Valencia, at the age of 86. 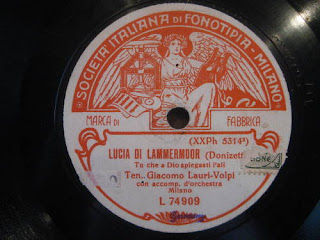 Giacomo Lauri-Volpi by Stampanoni
Posted by Ashot Arakelyan at 10:58 AM