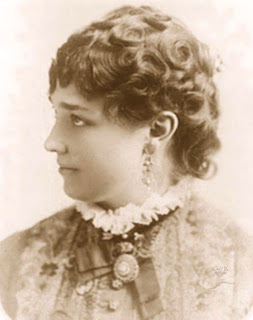 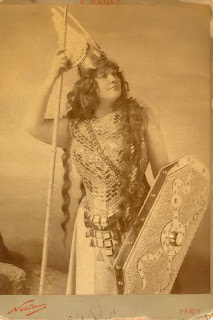 She was an American operatic soprano who had an active international career from 1876 up into the first decade of the 20th century. She possessed a large, expressive voice which enabled her to sing a broad range of roles that extended from the coloratura soprano repertoire to dramatic soprano parts. She made six recordings with Fonotipia Records in Paris in 1905.
Born Adele Chapman in Boston, Adini studied singing with Giovanni Sbriglia and Pauline Viardot in Paris. She married the Spanish tenor Antonio Aramburo while studying in Paris. She made her professional opera debut in 1876 at the opera house in Varese, Italy in the title role of Giacomo Meyerbeer's Dinorah. She was then active with the Mapleson Company in New York City, making her debut with the company in 1879 as Gilda in Giuseppe Verdi's Rigoletto at the Academy of Music with Aramburo as the Duke of Mantua. She was later heard with the company as Leonora in Verdi's Il trovatore to her husband's Manrico.
In 1882 she joined Bartolomeo Merelli's traveling opera troup with whom she performed in Berlin (1882) and Prague (1883). From 1887-1890 she was committed to the Palais Garnier where she notably created the role of the Duchesse d'Étampes in the world premiere of Camille Saint-Saëns' Ascanio (1890).
In 1893 Adini sang Brünnhilde in the Italian premiere of Richard Wagner's Die Walküre at La Scala. She later repeated the role at the Teatro Regio di Torino (1898) and the Teatro Costanzi (1899). In 1894 and 1897 she was heard successfully at the Royal Opera House in London as Donna Anna in Wolfgang Amadeus Mozart's Don Giovanni. She sang the role of Frédegonde in the world premiere of César Franck's Ghiselle at the Opéra de Monte-Carlo in 1896.
Her second husband was the opera librettist and writer Paul Milliet. He wrote the libretto for Jules Massenet's Hérodiade in which she sang the role of Salomé in Monte-Carlo in 1903 with Emma Calvé in the title role. Some of the other roles Adini performed on stage were Anita in La Navarraise, Brunehild in Sigurd, Catherine d'Aragon in Henry VIII, Charlotte in Werther, Chimène in Le Cid, Countess Almaviva in The Marriage of Figaro, Desdemona in Otello, Isolde in Tristan und Isolde, Rachel in La Juive, Sélika in L'Africaine, Simonetta in I Medici, Valentine in Les Huguenots, and Venus in Tannhäuser.
After retiring from the stage Adini was active as a singing teacher. One of her notable pupils was the Spanish mezzo-soprano Maria Gay. She died in Dieppe, Seine-Maritime in 1924. Opera commnettor Michael Scott summarises her career and evaluates her recordings in The Record of Singing (Duckworth, London, 1977).

Posted by Ashot Arakelyan at 5:15 PM