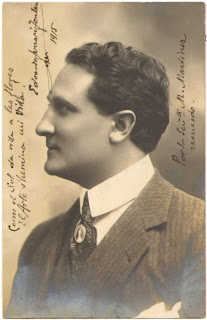 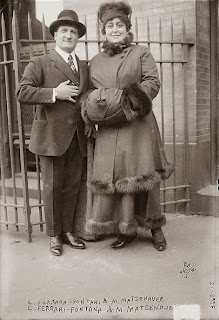 with his wife Margarete Matzenauer


He turned to singing after starting a career in medicine and then working in the Italian Embassy at Montevideo. After touring South America in operetta he was encouraged by Tullio Serafin to study for opera; his début was as Tristan (Turin, 1910), and he soon established himself as the leading Italian Wagnerian tenor of his day. At La Scala he sang Pollione in Norma (1912), and the following year he appeared as Avito in the première of L᾽amore dei tre re. This he repeated, with Arturo Toscanini, at the Metropolitan in 1914, singing with a magnificent robust voice with pealing upper tones. He also appeared in Buenos Aires and was a member of the Boston Company, where he sang Tristan in 1912 (with his wife, Margarete Matzenauer, as Isolde in some performances). From 1926 he taught in Toronto. His few recordings show a voice of fine quality, compact in production, and used with taste and imagination.

Posted by Ashot Arakelyan at 3:30 PM