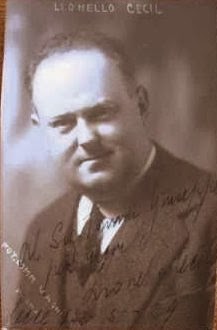 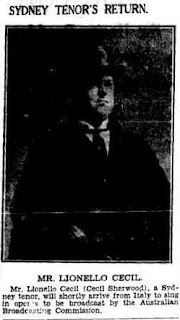 He was born on 20 September 1893 at Waverley, Sydney, and registered as Lionel Cecil, son of Abraham Robert Sherwood, a senior sergeant of police, and his wife Kate, née Heagan, both from Ireland. Educated at Sydney Grammar School, Cecil studied singing with Hector Fleming and made his concert début on 30 September 1912. His next teacher Andrew Black encouraged him to study abroad and Cecil left for Europe in March 1914 after giving a concert at Sydney Town Hall. That year he won a scholarship to the Verdi Regio Conservatorio, Milan, Italy, and from 1916 studied with Mario Pieraccini. Adopting the stage name 'Lionello Cecil', he made his opera début in 1918 at the Storchi Theatre, Modena, as the Duke in Rigoletto. He rapidly established himself as a leading operatic tenor of the Italian provincial houses. In London on a concert tour, on 21 June 1923 at the register office, Paddington, he married Argia Armanda Giustina Mattioni, a ballet dancer from Trieste, Italy. For almost fifteen years Cecil gave hundreds of performances in such places as Pisa, San Remo, Parma, Verona and Bergamo. He made occasional appearances at more famous opera houses, including the Dal Verme and the Lirico, at Milan, with seasons at La Fenice, Venice (1921, 1925) and at the Costanzi, Rome (1925). Having toured South America in 1926, he sang next year with an Italian opera company in Austria, Switzerland, Germany and Spain. In 1931 he appeared at Nice and Marseilles, France. His recording career had begun in 1919 with discs made acoustically in England for Pathé. He sang tenor lead in the first microphone recording of La Traviata (Italian Columbia, 1928) and in Madama Butterfly (Italian His Master's Voice, 1929-30), and made his last recordings in 1942 (Columbia, Australia): these discs reveal a powerful lyric tenor and singing characterized by intelligence rather than virtuosity. Under contract to the Australian Broadcasting Commission, in September 1933 Cecil returned to Australia; in 1933-34 he sang the lead in all but one of eighteen broadcast operas. He did studio and concert work across the country for the A.B.C. until 1942, and taught his own pupils (including Ken Neate) in Sydney. After touring New Zealand in 1937, Cecil sang Alfred Hill's music in Ken Hall's film, The Broken Melody (1938). As a military censor during World War II, Cecil interpreted for Italian prisoners of war interned at Cowra. From 1942 he appeared as 'Lionel Cecil'. At the New South Wales State Conservatorium of Music in July 1944 he sang Canio in Pagliacci, in what was probably his farewell to the stage. The master of some fifty operatic roles (of which Faust in Boito's Mefistofele was his favourite), Cecil possessed 'great personal charm and impeccable manners', and was an amiable, unpretentious man who enjoyed playing cards; stockily built, he had dark, receding hair, somewhat heavy features and a florid complexion. In the early 1950s his health deteriorated. Predeceased by his wife and survived by their son, he died of constrictive pericarditis on 13 November 1957 at St Leonards, Sydney, and was cremated with Anglican rites.