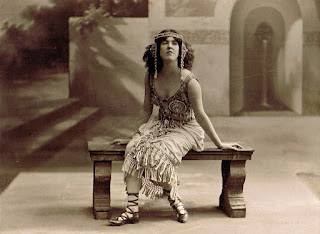 First she studied at the Royal Conservatoire in Stockholm, then with Thekla Hofer in Stockholm (1899-1904), under Therese Schnabel-Behr in Berlin (1904-1905) and with Etelka Gerster in Bologna (1905-1906). Already in 1902 she sang in Stockholm solo part in Händel’s oratorio ‘’Samson’’. In 1906 she made her debut at the Stockholm Royal Opera as Pamina in "Zauberflöte". In the 1906-1908 seasons she was engaged by the Court Theater in Mannheim, in the 1908-1911 seasons she was a member of the Vienna Court Opera. Her star role was the part of Salome in R. Strauss’s opera ‘’Salome’’. In 1910 she made guest appearances at the London Covent Garden (Salome/Senta in "Fliegenden Holländer"). She appeared with great success also in Paris as Salome. She made guest appearances also at the Berlin Court Opera. In the 1912-1913 season she was engaged again by the Royal Opera. In the 1912-1913 and 1924-1925 seasons she undertook successful concert tours in the USA. After her retirement she taught singing in Stockholm.

Posted by Ashot Arakelyan at 11:42 AM