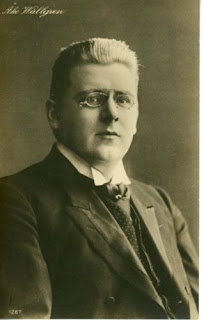 He studied singing under Julius Günther in Stockholm and made his debut in 1900 at the Kungliga Teatern in Stockholm as Lothario in ‘.’Mignon’’. He appeared with success at this significant Swedish opera theater till 1934. To his mostly admired achievements belonged the Gremin in P. Tchaikovsky’s ‘’Eugene Onegin’’, Boris Godunov, Padre Guardiano  in G. Verdi’s ‘’Forza de destino’’, Hans Sachs in "Meistersingern", Wotan in "Ring des Nibelungen". He sang this part also in 1901 in the Swedish première of R. Wagner’s "Rheingold" at the Stockholm Opera. Here he appeared also in the following opera premieres: 1903 Ran (Wilhelm Peterson-Berger)/1919 Domedagsprofeterna (Wilhelm Peterson-Berger)/1927 "Adils och Elisiv" (Wilhelm Peterson-Berger)/1929  "Engelbrekt" (Nathanael Berg). In 1914 he received the order ‘’Litteris et artibus’’. In 1924 he became a member of the Music Academy of Stockholm. In 1930 he was appointed the Swedish court singer. Married the singer Ester Nilsson (?-1938).
Chronology of some appearances

Posted by Ashot Arakelyan at 9:06 AM