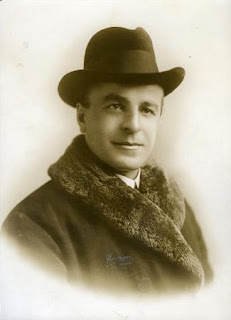 First he learned the occupation of a gardener, then studied singing at the Liceo Musicale in Torino by Fausto Del Marchi, later with Oreste Taverna and Alessandro Rissone (1900-1902). In 1907 he made his debut as Ernesto at the Teatro dell'Alleanza Coopoerativa in ‘’Don Pasquale’’. Already in 1909 he appeared at the Teatro Bosque in Barcelona among other things as Rodolfo in ‘’Boheme’’. In 1910 he sang with great success at the Teatro La Fenice in Venezia in G. Rossini’s '’’La Cambiale di Matrimonio’’ and at the Teatro Dal Verme in Milano in ‘’Lucia di Lammermoor ‘’ opposite  Amelita Galli-Curci (1911). In 1915 he went for four years to America. Here he sang first in Rosario di Santa Fè, then in Buenos Ayres, Montevideo, San Juan de Portorico and Santo Domingo. He appeared in Buenos Aires in a gala performance of G. Puccini’s ‘’Manon Lescaut’’ before the Argentine president Feliciano Viera, and undertook a vast guest performance tour in the 1915-1916 season  through the USA. In 1918 he was staying in Havana and in San Juan di Portorico, in the end, he visited Puerto Rico and Caracas. He returned to his Italian native country and in 1919 appeared at the Teatro Nazionale in Roma as Alfredo in ‘’La Traviata’’, Enzo in ‘’La Gioconda’’ and Cavaradossi in ‘’Tosca’’. In 1920 he sang the part of Enzo in ‘’La Gioconda’’ under the direction of Pietro Mascagni in Livorno. In 1925 he appeared as soloist in a concert at the Teatro Regio in Torino.  Still in 1955 he took part in a concert at the Turin church San Mauro. He was a correspondent of English and American music magazines and appeared also in Italian sound films.

Posted by Ashot Arakelyan at 9:49 AM