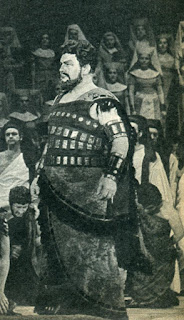 He studied singing under the pedagogues Mihály Makkai and Arpád Palotai. Additionally he perfected his vocal technique under Manfredo Polverosi in Roma. In 1937 he made his debut at the National Opera of Budapest as Speaker in "Zauberflöte" and then for nearly forty years he was the leading baritone of this opera house. He appeared here in more than 70 roles, among other things as Wolfram in ‘’Tannhäuser’’, Fliegenden Holländer, Telramund in ‘’Lohengrin’’, Kurwenal in ‘’Tristan und Isolde’’, Hans Sachs in "Meistersingern", Wotan in "Rheingold", Gunther in "Götterdämmerung" and Amfortas in ‘’Parsifal’’, Rigoletto, Renato in ‘’Un Ballo in maschera’’, Posa in ‘’Don Carlo’’, Amonasro in ‘’Aida’’, Jago in ‘’Otello’’, Count in ‘’Nozze di Figaro’’, Wilhelm Tell, Escamillo in ‘’Carmen’’, Jochanaan in ‘’Salome’’, King in ‘’Bánk-Bán’’ and as Jara in ‘’Hunyady László’’ of F. Erkel. He undertook numerous international guest performances, among other things at the State Opera in Vienna, at the Bolshoi Theater in Moscow, in Brussels, Berlin and Frankfurt a. M.

Posted by Ashot Arakelyan at 11:19 AM