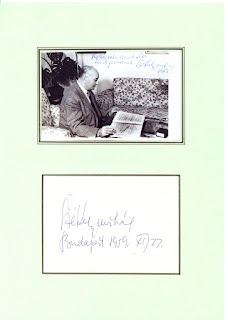 He studied singing at the Conservatoire in Budapest with Géza Laszló and made his debut in 1920 at the National Opera in Budapest as Ferrando in ‘’Il Trovatore’’. Up to his death he remained a popular member of the Budapest Opera. He made successful guest performances in Germany, Austria and Italy, above all at the Vienna State Opera and in 1937 at the festival of Salzburg. In the 1946-1950 seasons he was a member of the Metropolitan Opera in New York (debut: Hunding in "Walküre"). He appeared there among other things as Sparafucile in ‘’Rigoletto’’, Fiesco in G. Verdi’s ‘’Simon Boccanegra’’, King in ‘’Tristan und Isolde’’ and Fafner in the operas of the Nibelungenrings. In the 1957-1962 seasons he sang at the Glyndebourne festival among other things as Osmin in "Entführung aus dem Serail", Bartolo in "Figaros Hochzeit", Rocco in "Fidelio" and as Sarastro in "Zauberflöte". In the 1957-1958 season he was active temporarily at the Munich State Opera, then went back, however, again to Budapest. His repertoire included Leporello in ‘’Don Giovanni’’, Sarastro in "Zauberflöte", king Philipp in ‘’Don Carlo’’, Basilio in ‘’Il Barbiere di Siviglia’’, Boris Godunov, Dositheus in ‘’Khovantchina’’ and Gremin in ‘’Eugene Onegin’’.

Posted by Ashot Arakelyan at 12:00 PM