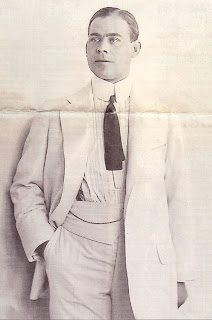 He was a pupil of Oskar Lejdström in Stockholm. He continued his education under Quadri in Milan. In 1909 he made his debut at the Royal Opera in Stockholm as Escamillo in ''Carmen'' of G. Bizet. In 1910 he appeared there in the premiere of the opera ''Arlnjot'' of Wilhelm Peterson-Berger, in 1932 in in ''Resan till Amerika'' of Hilding Rosenberg. Till 1934 he was a member of this opera house. His repertoire culminated in the dramatic parts like Amonasro in ''Aida'', Alberich in Ring-Zyklus, Scarpia in ''Tosca'' and Beckmesser in ''Meistersingern''. After his retirement, he taught singing.

Posted by Ashot Arakelyan at 9:38 AM