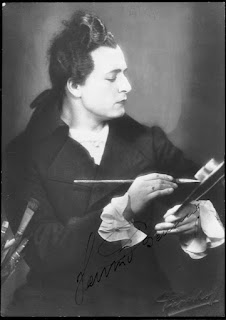 He studied singing under H. Ditt in Cologne and O. Waldner in Vienna. He began his career at the Opernhaus in Hannover. From 1935 to 1939 he was engaged by the Oper in Cologne. In 1938 he made successful guest appearances at the Opernhaus in Frankfurt a. M. as Alfredo in ‘’La Traviata’’, Pinkerton in ‘’Madama Butterfly’’ and as Hans in B. Smetana’s ‘’Verkaufter Braut’’. Since  1939 he was a principal tenor of this  opera house, where he worked up to his death. Here he sang a huge number operatic parts: Idamante in ‘’Idomeneo’’, Belmonte in ‘’Entführung aus dem Serail’’, Cavaradossi in ‘’Tosca’’, Turiddu in ‘’Cavalleria Rusticana’’, the Italian singer in ‘’Rosenkavalier’’, Hugo in 'Undine' and Max in ‘’Freischütz’’. He appeared in Frankfurt in the premiere of the opera ‘’Odysseus’’ of H. Reutter as Telemach (1942). With the ensemble of the Frankfurt Opera he made guest appearances in 1940 at Belgrade, in 1944 at the Teatro Liceo in Barcelona. In the 1940-44 seasons several times he sang as a guest at the Staatsoper in Vienna, in the  1942-1944 seasons he had a guest contract with the Opernhaus of Leipzig. After the Second World War, since 1947, he was connected (up to his death) as a guest by contract to the Staatsoper in Hamburg, also sang at the Opernhaus of Cologne. In 1951 he appeared at the Salzburg festival (Andre in ‘’Wozzeck’’). Especially he was highly acclaimed in Italian repertoire: Alfredo in ‘’La Traviata’’, Manrico in ‘’Il Trovatore’’, Riccardo in ‘’Un Ballo in maschera’’, Radames  in ‘’Aida’’, Don Carlo, Duke in ‘’Rigoletto’’, Kalaf in ‘’Turandot’’, José in ‘’Carmen’’ and Hoffmann in ‘’Les Contes d'Hoffmann’’. An international career was prevented by the situation of the years of war and by the early death of the artist. He made a few complete operas for the Frankfurt Radio.

Posted by Ashot Arakelyan at 9:10 PM