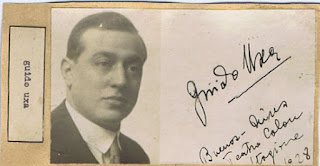 Since 1912 he had a successful stage career as comprimario at the famous Italian operatic theaters of Turin and Palermo. In the 1921-1922 season he appeared at La Scala in Milano, among other things as Ulrich Eisslinger in "Meistersingern" and in the premiere of the opera ‘’Debora e Jaele’’ by I. Pizzetti under A. Toscanini. In 1921 he guested at the Teatro Comunale in Bologna, in 1924 he sang at the Teatro Costanzi in Roma in the premiere of Renzo Bianchi’s ‘’La Ghibellina’’. In 1920 he performed at the Teatro Colón in Buenos Aires in both Buffo parts in ‘’Mefistofele’’ of A. Boito, in 1929 in the same opera house in G. Puccini’s ‘’Turandot’’. In the 1932-1933 season and in 1935 he was engaged by the Italian Opera in Holland. He was also a gifted actor.

Posted by Ashot Arakelyan at 5:00 PM