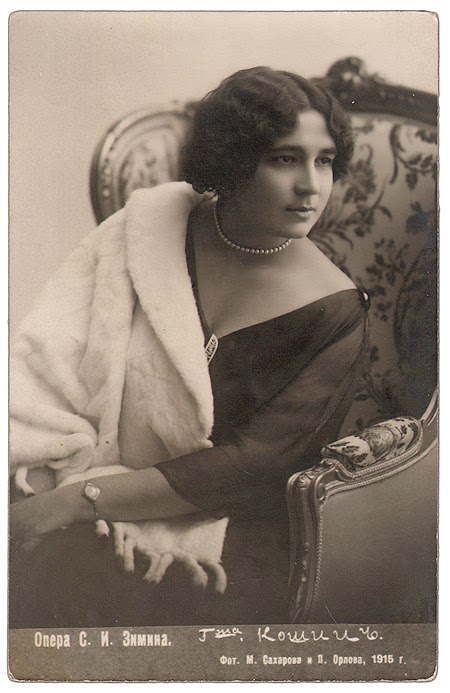 She was born into a family of intellectuals in then moved to and became an opera singer. In 1908—13 she studied in the Moscow State Conservatory (professor of solo singing U. Mazetti), her piano teachers were N. Shishkin, K. Igumnov, S. Taneev). Having received voice lessons in from the retired dramatic soprano Felia Litvinne, she sang leading roles in opera and performed in principal opera houses across and . In the late 1910s she performed at the Petrograd Conservatory and was accompanied by then-unknown Vladimir Horowitz . She had initially resisted being accompanied by the unknown student, but afterward insisted that only he could accompany her there; she subsequently programmed some of Horowitz's songs. In 1920 she went to and joined the Chicago Opera Association where she sang in the premiere of Prokofiev's ‘’The Love for Three Oranges’’ (1921). She later performed for the Russian Opera Company in and on tour in . At the end of the 1920s she was active in , where she appeared in the French premiere of ‘’Sadko’’. Known for her overly-extravagant life style, her vocal powers declined in the 1930s and in 1940 she retired to where she made a living as a voice teacher and restaurateur (a venture that ended in bankruptcy in 1942). She also appeared in bit parts in several movies.

Posted by Ashot Arakelyan at 3:49 PM