Her real name was Elena De Monzunu. She was born into a theatrical family. She studied piano with Ratti and voice with Sangiovanni, both at the Milan Conservatory. Her debut as a mezzo-soprano, was in 1877 when she sang Conde in Donizetti's ‘’Maria di Rohan’’ at . For the next two years she undertook mezzo-soprano roles in , , , Livorno and . Her soprano debut took place in 1879, when she sang Marie in ‘’La Figlia del Reggimento’’, followed by Rachel, in ‘’La Juive’’ (probably given as ‘’L'Ebrea’’) at the Dal Verme, . At La Scala, in 1880 she sang Margherita in ‘’Faust’’, and in 1881 the part of Valentine in ‘’Gli Ugonotti’’. In 1882 she appeared there in the world premiere of Smareglia's ‘’Bianca da Cervia’’. For ten years from 1884, when she appeared with Tamagno, at the old Teatro Colon, Buenos Aires, her career flourished: Covent Garden (1886 in ‘’Don Giovanni’’ (Donna Anna), ‘’La Gioconda’’ and ‘’Ugonotti’’); La Scala (Gastaldon's ‘’Mala Pasqua’’, based on the same Verga source as ‘’Cavalleria Rusticana’’); Lisbon, and Bucharest, in concert as in opera. In 1909 she founded the Accademia Teodorini in , and from 1916 to 1923 she taught singing in . Among her pupils was Bidu Sayao. In 1924 she returned to , where in 1925 she became Professor of Singing in the . In 1902 she made 6 records for G&T in Milano. 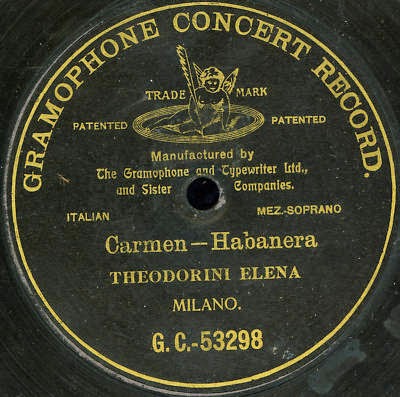 Posted by Ashot Arakelyan at 9:52 AM