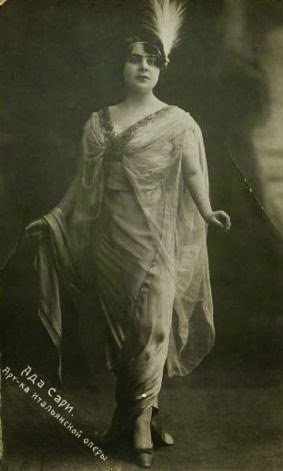 Her real name was Jadwiga Szajerówna. She studied singing in and made her debut in 1909 at the Teatro Nazionale in Rome as Marguerite in ‘’Faust’’ of C. Gounod. In  the 1912-1914 seasons she appeared with success at the Teatro San Carlo in Napoli, then at the Teatro Dal Verme in Milano and in and . During her activity in she sang also at the opera houses in and . In 1914 she sang with great success in as Thaïs in J. Massenet’s opera of the same name and as a partner of Mattia Battistini in A. Rubinstein’s ‘’Demon’’. In 1914 she made guest appearance at the Court Opera in . At the beginning of her career  she sang lyrical roles, but since 1914 she specialized in coloratura roles. After the First World War she sang a lot in South America, especially since 1918 at the Teatro Colón in , and undertook a concert tour through North America and appeared among other things at the Carnegie Hall in and alos in . In 1923 she performed at the Teatro Alla Scala in Milano as Queen of the Night in ‘’Magic flute’’. During the following years she often sang at the Vienna State Opera and at the opera houses in and . She also sang at the Grand Opéra in , guested in (1920 and 1924) and (1925), at the Royal Opera in (1926) and (1929). As a concert singer and as an oratorio singer she stood in high respect, in particular as a soloist in Beethoven's 9-th symphony. She appeared among other things in concerts in (1924, 1927, 1931) and (1927). Since 1939 she lived in , but in 1947 she guested again at the Vienna State Opera as Gilda in ‘’Rigoletto’’. Late she worked as a vocal pedagogue at the conservatoire in .

Posted by Ashot Arakelyan at 6:32 PM