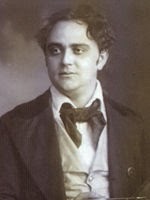 He been descended from a Czech family and received the first singing education at the conservatoire in from K. Burian, then he continued with August Iffert in . His debut took place in 1915 at the Municipal Theatre of Pilsen to which he belonged till 1918. Then he joined to the Vinohradské Divadlo (Theatre in Weinbergen) in . In 1920 he was engaged as a heroic tenor by the German Land Theatre in , where he sang mostly R. Wagner's repertoire. In the 1927-29 seasons he was active at the Theatre in Saarbrücken, in the 1929-30 season at the Municipal Theatre of Münster, in the 1930-33 seasons at the German Theatre in Teplitz-Schönau, in the 1933-34 season at the German Theatre of Aussig (). From 1934-37 he appeared as a guest in different Czech theaters, also at the National Theatre in . In 1939-42 again he was a member of the German Theatre in Brünn (). His repertoire included roles like Florestan in ‘’Fidelio’’, Max in the ‘’Freischütz’’, Lohengrin, Tannhäuser, Otello of Verdi, Canio in ‘’Pagliacci’’, José in ‘’Carmen’’, Samson in ‘’Samson et Dalila’’ of Saint-Saëns etc. He was married with dancer Maria Klimesch. He spent his old age in Baden, near .

Posted by Ashot Arakelyan at 1:45 PM