Her voice was discovered in 1910, by the famous prima donna Nellie Melba, during her Australian tours. First she received her education at the conservatoire of under Elise Wiedermann, then studied singing in with Mathilde Marchesi de Castrone. She made her debut in 1912 at the Boston Opera as Lucia di Lammermoor. She married to the tenor Howard White and undertook with him a concert tours in North America and . After her successful appearances in Boston, in the 1919-1921 seasons she was engaged by the Metropolitan Opera in New York, where she made her debut as  Eudoxia in Halévys ‘’La Juive’’. At the Metropolitan Opera her parts included Lucia di Lammermoor, the queen of Shemakan in ‘’The Golden Cock’’, Norina in ‘’Don Pasquale’’ (This part she sang as a partner of Enrico Caruso). She gave a recitals through the , and and had a huge success in . Here, about 1935, she had a significant career as a concert soprano, and sang only seldom on the stage. She was also a gifted pianist and developed a substantial talent as a painter. She trained in the classical manner of the Marchesi school. 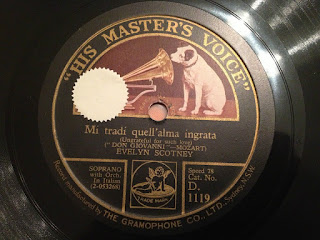 Posted by Ashot Arakelyan at 5:47 PM