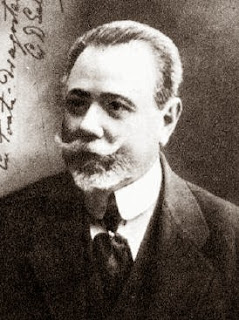 
His real name was Grigore Gabrielescu. First he studied at the Royal Conservatory of Music and Dramatic Art in , then finished the faculty of law at the . He made his debut in ‘’Martha’’ of Flotow (1880). With the help of Adelina Patti, he attended the Conservatory in  (1885). After finishing he appeared at la Scala in , Teatro Reale of, Theatro Son Carlo of Lisbon and in other famous theatres of , and . In 1889 he appeared at La Scala in  in the world premiere of Puccini’s opera ‘’Edgar’’ singing the role of Edgar. In the same year he also performed at La Scala, Milan opposite Antonio Magini-Coletti and Romilda Pantaleoni in Donizetti’s ‘’Lucia di Lammermoor’’.Was among the first four major tenors of the world authorized by Verdi to sing the title role in Otello. Probably he retired from the stage in 1894. Honorary Member of the Academy of music in Lisbon he was a director of the National Theatre in Craiova (1904) and the school of music of the  Elefterie şi Maria Cornetti (1911-1915). He never made records.

Posted by Ashot Arakelyan at 12:46 PM