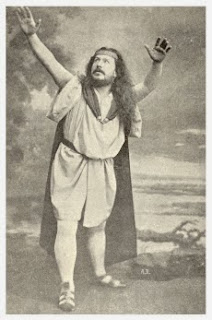 He studied under the famous teachers Romani and Bianchi in Istituto Musicale di Firenze in. In 1871-1872 he successfully made a debut as baritone in Teatro Pagliano (today Teatro Verdi) in the opera "Contessa di Amalfi" by Errico Petrella. After working in theatres of Florence, where he played various leading roles, he moved to Rome to sing in Apollo theatre, then to Milan where he worked in La Scala, Dal Verme and Manzoni theatres, then to Venice to sing in Teatro La Fenice and finally to Bologna to Teatro Comunale. The lustrous operatic career of Augusto Brogi includes an interesting story with a well known opera "Otello" by Giuseppe Verdi. Called to prepare for the part of Iago, the singer discovered that the tenor role of Otello was closer to his heart. And just like that, after 15 years of being a baritone, Brogi moved on to performing tenor parts which continued for another 15 successful years. The historical chronicles say that the ease with which Augusto Brogi worked, his extremely soft and pleasant timbre, his delivery, classic gestures and interpretation, made it possible for the gifted artist to play a very broad range of roles. Later on as his career became more and more successful, Brogi also worked in most of the major theatres in Paris, Vienna, St.Petersburg, Stockholm, Pest, Copenhagen, Moscow, Buenos Aires and Rio de Janeiro. His wide repertoire included 70 operas with famous parts by Verdi, Rossini, Bellini, Donizetti and Bizet among his favourites. He never made records.

Posted by Ashot Arakelyan at 12:54 PM