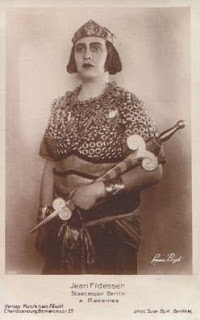 
First he became a bank employee. He studied singing among other things under E. Mauck and began his career in 1922 as a baritone at the Stadttheater in (Sachsen). In the 1924-1926 seasons he sang at the  Nationaltheater in . After his voice had changed, retrained by Laurenz Hofer, to the tenor, he was engaged by the Stadttheater in Elberfeld, where in 1926 he and made his second debut as a tenor in the part of Radames in G. Verdi’s ‘’Aida’’. His repertoire included Don Ottavio in Don Giovanni’’, Florestan in ‘’Fidelio’’, Adolar in ‘’Euryanthe’’ of Weber, Lohengrin, Max in ‘’Freischütz’’, José in ‘’Carmen’’, De Grieux in ‘’Manon’’ of Massenet, Hoffmann in ‘’Les contes d'Hoffmann’’, Julien in ‘’Louise’’ of Charpentier, Duke in ‘’Rigoletto’’, Cavaradossi in ‘’Tosca’’, Pelléas in ‘’Pelléas et Mélisande’’. After the Second World War guest appearances took place at operetta theaters. He appeared also in some German sound film. After his retirement, he began work as a vocal pedagogue in , where he spent his old age.

Posted by Ashot Arakelyan at 9:53 AM