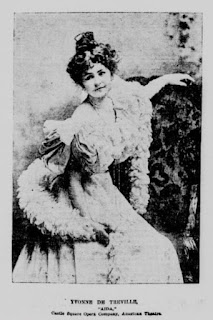 Her real name was Edyth Le Gierse. She studied singing in Paris under Mathilde Marchesi de Castrone and made her debut in 1897 with the Castle Square Opera Company in New York. As a member of this opera troupe she sang among other things in 1898 the part of Mimi in the New York première of G. Puccini’s ‘’La Bohème’’. In 1899 she again came to Paris and continued her study with Mathilde Marchesi. In 1902 she made her debut at the Paris Opéra-Comique as Lakmé. During the following ten years she made successful guest appearances in Stockholm (1903 and 1910), St. Petersburg (1904-05), Bucharest, Budapest, Nice, Berlin and Prague. Especially she was highly appreciated at the Théâtre de la Monnaie in Brussels, where she was engaged in the 1907-1909 seasons. In 1909 and 1910 she appeared at the Vienna Court Opera (Rosina in ‘’Il Brbiere di Siviglia’’/Mimi in ‘’La Boheme’’). In 1910 she sang at the opera houses of Frankfurt a. M. and Cologne, in 1911 at the Court Theater in Hannover. In 1912 she returned to America, where she continued her career now primarily as a concert singer. Later she taught singing in New York.

Posted by Ashot Arakelyan at 8:02 PM