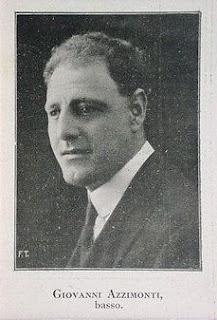 He made his debut in Italy. In  the 1915-1916 season he sang at the Italian Opera in Holland. Here he appeared as king in ‘’Aida’’, Tom in ’’Ballo in maschera’’ and Stromminger in ‘’La Wally’’. He took a ship to England. On the way across the English Channel, the Sussex was torpedoed by a German U-boat, as part of the German World War I policy of unrestricted submarine warfare. He survived, while the Spanish composer Enrique Granados and his wife as well as the Spanish mezzo-soprano Rosita Cesaretti died. In Italy Azzimonti continued his Comprimario career and appeared there among other things also at La Scala, where he on 23. 4. 1923  he sang in the premiere of the opera ‘’Belfagor’’ by O. Respighi. In 1935 iat Florence he took part in the premiere of  I. Pizzetti’s  opera ‘’L'Orseolo’’. In the 1934-1935 season and in 1943 he again made guest appearances in Holland. 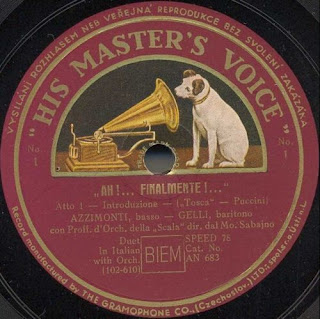 Posted by Ashot Arakelyan at 10:30 AM