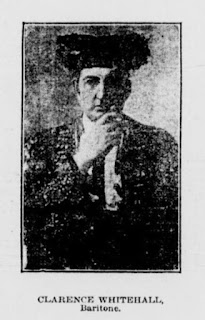 He began his education with L. A. Phelps in Chicago, then went to Europe, where he became a pupil of Giraudet and Giovanni Sbriglia. In 1898 he made his debut at the Théatre de la Monnaie in Brussels as Count Capulet in ‘’Roméo et Juliette’’ by C. Gounod. In 1899, under the artistic name Eugene Clarence (as the only American opera singer), he appeared at the Opéra-Comique in Paris as Nilakantha in ‘’Lakmé’’. In 1900 he joined the Savage Opera Company and went on a tour in USA. In 1901 he made his German debut at the Stadttheater in Lübeck. In 1902 he perfected his vocal technique with Julius Stockhausen in Frankfurt am Main. In the 1902-1904 seasons he sang at the Stadttheater in Elberfeld. From 1904 to 1909 he was engaged by the Opernhaus in Cologne. On 30. 3. 1904 he sang in Elberfeld in the premiere of the opera ‘’Koanga’’ by F. Delius. In 1905 he had a huge success in Cologne in the German première of I. de Lara’s ‘’Messaline’’. In 1905 he appeared at the Hoftheater in Hannover. In the 1906-1907 season Whitehill joined to the Hofoper of Munich. In 1908 he guested in Amsterdam. The public especially appreciated his interpretations in Richard Wagner’s operas (he studied the Wagner style under Julius Kniese in Bayreuth by the errand of Cosima Wagner). At Bayreuth festival he appeared in the following operas: ‘’Tannhäuser’’ (Wolfram, 1904), ‘’Parsifal’’ (Amfortas,) and Götterdämmerung (Gunther, 1908-1909). In 1909 he was engaged by the Metropolitan Opera in New York, where he made his debut as Amfortas in ‘’Parsifal’’. Till 1910 and then again from 1914 to 1932 he belonged to the ensemble of the Metropolitan Opera. At the Metropolitan Opera he sang in the following opera premières: "The Pipe of Desire" by Converse (1910), "Ägyptischer Helena" by R. Strauss (1928) and ‘’Louise’’ of G. Charpentier (1921) and "Violanta" of Korngold (1927). In the 1911-1916 seasons he was engaged by the Chicago Opera. In the 1905-1910 seasons he made guest appearances at Covent Garden in London. Here he sang in the English première of R. Strauss’s ‘’Salome’’ (Jochanaan, 1910). In 1909 he performed at Grand Opéra in ‘’Tannhäuser’’ (Wolfram) and "Walküre" (Wotan). In 1914 and 1922 he was to be heard as a member of the British National Opera  Company in London. After his retirement he taught singing in New York. 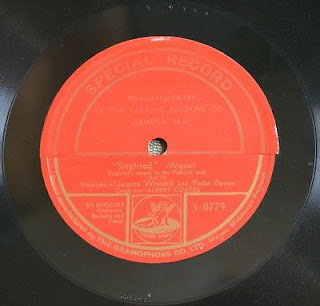 Posted by Ashot Arakelyan at 9:22 AM