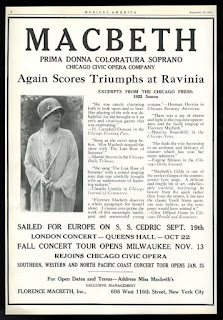 After her education in New York and Paris she gave her first concert in Scheveningen (1912). The next year she participated in concert under Thomas Beecham in London. In 1913 she made  her stage debut at the Court Theater in Brunswick as Rosina in ‘’Il Barbiere di Siviglia’’. She guested at the Court Theater of Darmstadt, sang the part of Olympia at the Court Opera of Dresden in ‘’Les contes d'Hoffmann’’ (1913) and joined in 1914 to the Chicago Opera, where she remained (with an interruption in the 1916-1918 seasons) till 1930. She made her debut there as Rosina in ‘’Il Barbiere di Siviglia’’ and appeared with great success as Amina in ‘’La Sonnambula’’, Lucia di Lammermoor, Gilda in ‘’Rigoletto’’, Adina in ‘’Elisir d'amore’’, Martha, Ophélie in ‘’Hamlet’’, Micaela in ‘’Carmen’’, Mimi in ‘’La Bohème’’, Traviata, Eudoxia in ‘’La Juive’’ and Zerline in ‘’Fra Diavolo’’. In 1919 she sang in Chicago the role of Anna in the American première of A. Catalani’s ‘’Loreley’’. In the 1921-1922 season she took part in North American tour as a member of the Cosmopolitan Opera. Till 1931 she made guest appearances at the Ravinia festival, among other things in the 1928-1929 season with great success as Lisetta in G. Puccini’s ‘’La Rondine’’. In the 1927-1928 season she performed at the San Francisco Opera in ‘’Martha’’ and ‘’Il Barbiere di Siviglia’’, ‘’Fra Diavolo’’. After her retirement she was active as pedagogue. In 1950 she married the author James M. Cain. 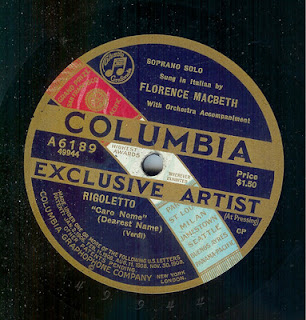 Posted by Ashot Arakelyan at 7:39 PM