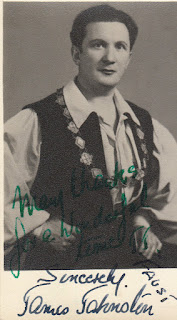 He studied singing under the pedagogue John Vine and made his debut in 1940 at the Opera of Dublin as Duke in G. Verdi’s ‘’Rigoletto’’. He remained till 1945 in Dublin and still continued his butcher business. Then he sang in different English opera theaters, among other things in Edinburgh, Glasgow and London. In the 1945-1951 seasons he performed with the Sadler's Wells Opera in London in many parts, among other things as Hans in B. Smetana’s "Verkaufter Braut", Rodolfo in ‘’La Bohème’’, Pinkerton in ‘’Madama Butterfly’’, Cavaradossi in ‘’Tosca’’, Turiddu in ‘’Cavalleria Rusticana’’, Canio in ‘’Pagliacci’’, Manrico in ‘’Il Trovatore’’, Faust, José in ‘’Carmen’’, Radames in ‘’Aida’’, and Alfredo in ‘’La Traviata’’. In the 1949-1958 seasons he sang at Covent Garden in London (debut as Alfredo in ‘’La Traviata’’ opposite Elisabeth Schwarzkopf). In this opera house he took over on 29. 9. 1949 in the premiere of the opera ‘’The Olympians’’ by Arthur Bliss in the part of Hector. In 1948 he appeared in the English première of G. Verdi’s ‘’Simon Boccanegra’’ at the Sadler's Wells Opera as Gabriele Adorno. In 1958 he returned to Belfast and was active as businessman.

Posted by Ashot Arakelyan at 9:10 AM