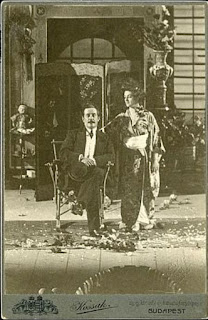 As Cio-Cio-San with Giacomo Puccini


Her real name was Elza Szamek. She was a pupil of the pedagogue Quirino Merli. In 1904 she sang at the Budapest National Opera the role of Dalila in the première of the opera ‘’Samson et Dalila’’of Saint-Saëns and had a shining success. The next year in this opera house she appeared as Carmen. Already in 1906 she began to take over soprano parts; thus she sang in 1906 at the Budapest première in Puccini’s ‘’Madama Butterfly’’ in the title role. In 1904 and 1905 she was staying at the Vienna  Court Opera. In 1906 she took part in a tour through North America with the Savage Opera Company. In 1906 with this opera troupe she appeared in the première of Puccini’s ‘’Madama Butterfly’’ also in North America and Washington. Her last big role which she interpreted in Budapest was the Martha in ‘’Tiefland’’ of E. d'Albert. Already in 1913 she retired from the stage.

Posted by Ashot Arakelyan at 9:13 PM