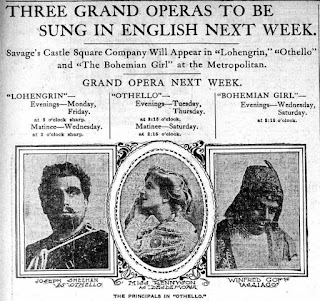 She began her education with Augusto Rotali in Boston and continued in Paris. After a tour through the USA, she again went to Europe and perfected her vocal technique under famous vocal pedagogues. In 1907 she made her debut at the Théâtre de la Monnaie in Brussels. In 1908 she appeared at the German Theater in Prague, where she had a significant success. In 1908 she made guest appearance at the Vienna Court Opera as Elisabeth in ‘’Tannhäuser’’.  In the 1908-1909 season she sang at the Court Opera in Dresden. At Bayreuth festival of 1909 she sang the part of Elsa in ‘’Lohengrin’’, in the 1909-1911 seasons she performed in ‘’Parsifal’’. In 1911 she gave a Sunday Night concert at the Metropolitan Opera in New York. Nevertheless, she soon retired from the stage. She made a few records for Columbia.

Posted by Ashot Arakelyan at 10:28 AM