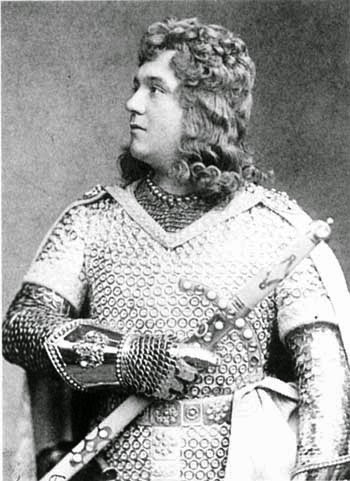 
He studied music theory and directing at the Royal Conservatory in under A. Warnots and was active first as director of chorus and chapel master  at the Dutch Opera in . Then on advising his wife he studied singing under Cornélie van Zanten in . He appeared for the first time as a singer in ‘’Matthäus-Passion’’ by J.S Bach. He began his stage career in 1897 at the Old Dutch Opera in in which remained till 1902. In the 1902-1903 he was engaged by the Opernhaus in Frankfurt am Main, in the 1903-1905 seasons he appeared at the Stadttheater in , then from 1905 to 1911 again sang in Frankfurt am Main. In the 1911-1912 season he sang at the Stadttheater in , from 1912 to 1915 at the Stuttgarter Hofoper. During the First World War he lived in . In 1904 he appeared at the Bayreuth Festival as Walther von der Vogelweide in ‘’Tannhäuser’’. He made guest appearances at the Hofoper in (1904), (1905) and (1908), also sang at the Hoftheater in (1910) and (1911). His repertoire included Walther von Stolzing, Siegried, Tannhäuser, Lohengrin, Tristan, Raoul in ‘’ Les Huguenots’’ and Manrico in ‘’Il Trovatore’’. He was married to the Dutch soprano Anna Tijssen-Bremerkamp. The end of his life ended tragically. He lived as a pedagogue and music professor in the town . He was stabbed in front of his house, when he became involved with troublemakers in front of his house.

Posted by Ashot Arakelyan at 5:27 PM