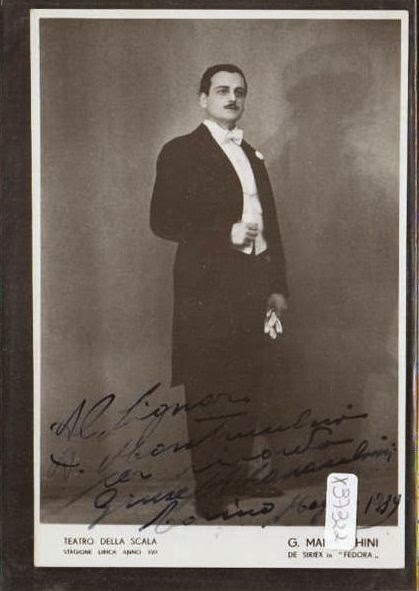 He studied in and , where he also made his debut in 1930. In 1934 he travelled as a soloist around with the choir of  the Teatro Alla Scala. In 1936 he appeared at the Opera House in as a partner of Toti dal Monte and Beniamino Gigli in ‘’Lucia di Lammermoor’’. Here he sang in the premieres of the operas ‘’Cyrano de Bergerac’’ of Alfano (22. 1. 1936), ‘’Notturno romantico’’ of Pick-Magiagalli (1936), ‘’Re Lear’’ of Alberto Ghislanzoni (1937) and ‘’Caracciolo’’ of Vittadini (1938). Since 1938 he also performed at the Teatro Alla Scala, among other things as De Siriex in ‘’Fedora’’ of Giordano. He appeared as a guest in and and in the 1948-1954 seasons often at the Teatro San Carlo in . He also gave guest performances in North America and . He counted one of the leading lyric Baritones of his generation in . To his star roles belonged the Figaro in ‘’Barbiere di Siviglia’’, Germont in ‘’Traviata’’, Renato in Verdi’s ‘’Ballo in maschera’’, Don Carlo in ‘’Forza del destino’’, Amonasro in ‘’Aida’’, Marcello in ‘’Bohème’’, Sharpless in ‘Madama Butterfly’’, Tonio in ‘’Pagliacci’’, De Siriex in ‘’Fedora’’ of Giordano and the Telramund in ‘’Lohengrin’’. Married to soprano Delia Benning. He spent his old age at the Casa di riposo Verdi in . In 1984 he appeared in the film ‘’Il bacio di Tosca’’ and sang before the camera again his Rigoletto.

Posted by Ashot Arakelyan at 9:31 AM