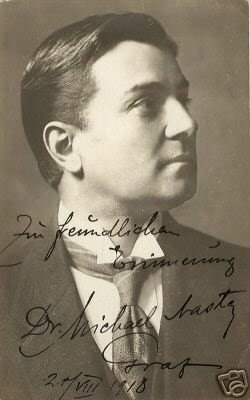 First he studied philology in , then received there also the first singing education and appeared already in 1902 as a concert singer. Then he went to , where he continued his education and concluded Doctorate Studies, however, devoted himself at the same time also to the song study. In 1907 he made his debut at the Municipal Theatre of Troppau (Opava) to which he belonged till 1909. In the 1910-1912 seasons he was engaged by the Opera House of Mährisch-Ostrau () and sang afterwards in the 1913-1914 season at the Vienna Court Opera. He took part from 1914 to 1915 as a soldier in the First World War, then appeared in the 1915-1916 season at the The Vienna Volksoper, in  the 1916-1918 seasons at the Opera House of Graz. From 1918 to 1921 he belonged to the Municipal Theatre in , where he sang in 1921 the role of Rinuccio in the German première of ‘’Gianni Schicchi’’. Then he was active guesting and in the 1925-1926 season performed at the German Theatre of Brünn (), in the 1927-1929 season sang at the Hamburg   Volksoper. After an engagement by the Municipal Theatre of Bremen (1930-31) he appeared in  the 1932-1933 season again at the  Hamburg Volksoper. Till 1934 he still appeared as a guest and then lived as a singing teacher in . Guest performances led him to the famous German opera houses, among other things to the Dresden Court Opera and to the opera houses of and .

Posted by Ashot Arakelyan at 9:24 AM