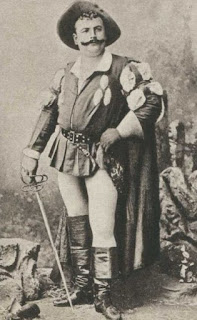 He studied singing under j. Kotarbinski and W. Mil­ler in . Additionally he perfected his vocal technique in under Augusto Broggi and Victor Maurel. On 24. 03 1892 he made his debut at the Grand Theatre of Łódź as Don Gaetano in forgotten opera ‘’Serce i ręka’’. The same year he appeard in Lviv as an operetta singer. In 1901 he was engaged by the Lviv Theatre of Opera and Ballet. In 1894 he made guest appearances in Łódź, Piotrków and Przemyśl. In the 1897-1898 seasons he sang again at the Lviv Theatre of Opera and Ballet performing as Zuniga in ‘’Carmen’’ and Tonio in ‘’Pagliacci’’. On April 1 of 1902 he married the singer Rose Rapacką. In 1903 he went on a tour in St. Petersburg, then made his debut at the Grand Theatre in Warsaw as Tonio in ‘’Pagliacci’’. In the 1906-1907 season he sang and acted in Lviv as director of operettas. In 1907 he returned to and became a professor of the Conservatory. In 1909, together with j. Puchniewski, he appeared as a guest in and the next year in . In 1911 he took over the management of the opera troupe in the and directed there ‘’Halka’’ and ‘’Pagliacci’’. During World War I he stayed in and worked there as a professor of the Conservatry. Also performed in operas and gave a recitals. The singer also organized concerts in Siberia and . After the war, he returned to . On 19. 09. 1919 he performed at the Teatr Wielki in "Stara baśń". In 1921 he sang at the Opera in . In the 1921-1922 season he made guest appearances at the Warsaw Teatr Wielki and sang there the parts of Alfio in ‘’Cavalleria Rusticana’’ and Tonio in ‘’Pagliacci’’. In 1923 he opened in a school for singing.

Posted by Ashot Arakelyan at 9:25 PM