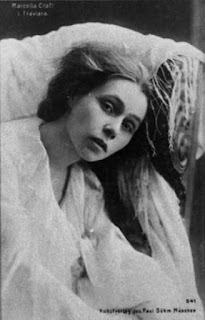 
First she studied singing under Charles R. Adams, then in with Francesco Mattino and Alessandro Guagni, later in . She made her debut in the Italian province and was engaged in 1905 by the  Stadttheater in Elberfeld. In the 1905-1907 seasons she sang at the Stadttheater in , from 1907-1909 at the Stadttheater in , in the 1909-1914 at the Hofoper in München. Here she had in 1910 a special success in ‘’Salome’’ of Richard Strauss under the management of the composer. She made guest appearances in , , Frankfurt a. M. and . In 1907 she performed at the Covent Garden in as an Agathe in ‘’Freischütz’’. In 1914 she stayed in , when the First World War broke out. She returned to , where she primarily at the concert hall. Then in the 1917-1918 season she was engaged again by the San Carlo Opera Company in the . In 1921 she made guest appearances in and as Nedda in ‘’Pagliacci’’ and as Gilda in ‘’Rigoletto’’. Her repertoire included Cio-Cio-San, Mimi in ‘’Bohème’’, Aida, Leonora in ‘’Trovatore’’, Marguerite in ‘’Faust’’ and Elvira in ‘’La Muette de Portici’’. In 1922 and in 1927 she sang again in as a concert singer (among other things in , and ). She was active temporarily as director and leader of the Riverside Opera in . Since 1930 she worked as vocal pedagogue in .

Posted by Ashot Arakelyan at 7:11 PM