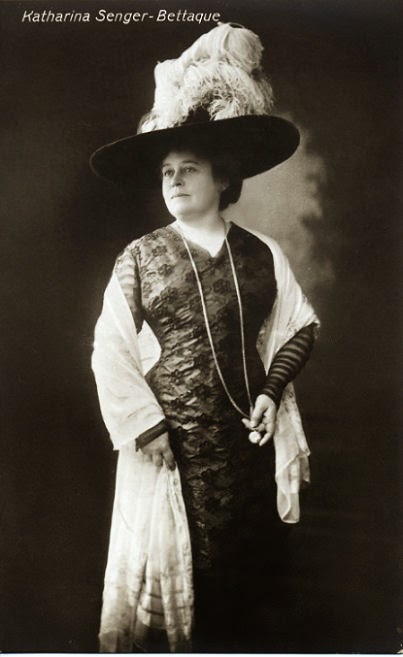 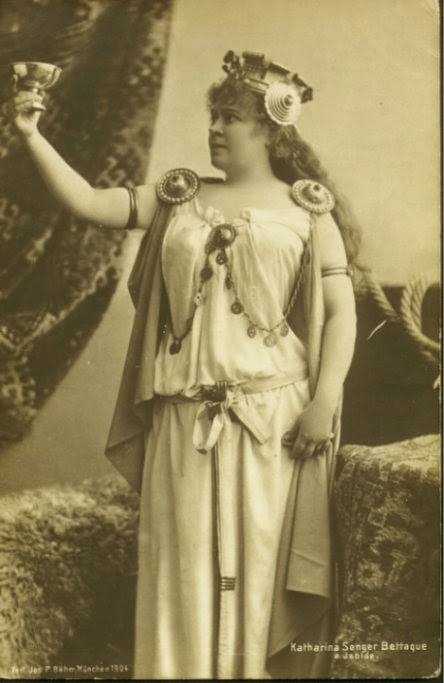 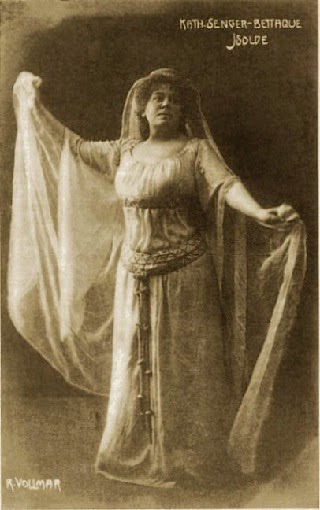 Born in , she enjoyed a career of international proportions that began there. After studying with Heinrich Dorn, Senger-Bettaque made a youthful début at the Hofoper (1879) in Rubinstein’s Feramors. Engagements as a lyric s. at , , and followed, and in 1888 she sang Eva and a "Blumenmädchen" at . Later that year she headed for New York and the Metropolitan where she was billed as Kathi Bettaque (Herr Senger was a few years down the road) and sang Freia in the American premiere of Das Rheingold, Marguerite in Faust, Sélika, Elsa, Marzelline in Fidelio, Sieglinde, Elisabeth and other rôles. At Covent Garden in 1892, she appeared in a number of her rôles as well as Gutrune, and Venus in Tannhäuser, but in 1894 she found her "home base" when she was named principal dramatic s. at . This house would be the center of her activities for most of her remaining career. Senger-Bettaque returned to the Met for a month of guest appearances during the 1904 – 05 season; by then her ambitions and European successes had her tackling the Die Walküre and Siegfried Brünnhildes and Leonore in Fidelio. In these rôles, the critics did not like her. She was, apparently, successful in these same rôles at (1906 – 09), and then her career seems to have come to and end. Today, Katherina Senger-Bettaque is an enigma lost to the ages. Even the year and location of her death are unknown, shrouded by the years that followed. Groves Dictionary of Opera is non-committal, cleverly assuming her death occurred after 1909 since she was still singing in then. Other sources have her alive in in the early to mid 1920s. It is sad, and somewhat baffling, due to her obvious talent and the wide scope of her long career, that she has been forgotten. Recordings: These remain as enigmatic as the singer who recorded them. Senger-Bettaque is known to have made about ten recordings in between 1901 – 05, and all belong in the "rare as stardust" category. Most are of song titles, and from what can be heard it appears that the recording process of her day unnerved her. The voice frequently sounds ill at ease, if not frightened. Some of this can be heard in one of her earliest discs, Franz’s lovely "Es hat die Rose sich beklagt." But the voice in general is of pure and lyric quality, almost "pretty," despite a variation from pitch or two. In fairness, it may have been that she was laboring under hopelessly inferior recording conditions, for even the piano accompaniment has a garbled, "wobbly" sound to it. A coupling of Wolf’s songs "Gesang Weylas" and "Morgentau," made a few years later, has a much steadier sound and Senger-Bettaque seems relaxed in the music; the voice here in much warmer and more appealing. One of her few operatic excerpts is Elsa’s "Euch Lüften, die mein Klagen." It is a well-sung piece with a charm of its own, but hardly displays a heroic or Brünnhilde-sized voice. After hearing her Elsa, it is difficult to imagine her as Ortrud in the same opera, but that rôle was in her large repertoire as well. She sang it once at a Met matinée in January 1905, with Emma Eames as Elsa. The volatile, cold-blooded American seems to have been particularly out of control that afternoon; after what she perceived to be an "upstaging" during the curtain calls, she slapped Senger-Bettaque across the face in full view of the audience! Reporters raced to her dressing room for comments, but the gracious Senger-Bettaque seemed outwardly unruffled. "Oh, I did not resent it," was her deceptively magnanimous reply. Then she added: "I was really surprised and delighted to see any evidence of emotion in Madame Eames."

Posted by Ashot Arakelyan at 4:13 PM