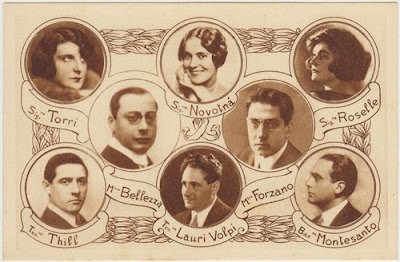 She studied at the Parma Conservatory first violin, then song. She debuted in 1919 at the Teatro Sociale of Valenza as Mimi in ‘’La Boh¨me’’. In 1921 she guested at the theatre of Sassari () as Margherita in Boito’s ‘’Mefistofele’’. In 1922 she sang at the Italian opera house in . In 1924 she appeared at La Scala as Musetta in ‘’La Boh¨me’’; there she also performed in 1926 in the premiere of the opera ‘’Il diavolo nel campanile’’ of Lualdi. In 1925 she came to the opera house of where she debuted in ‘’Manon’’ of Massenet and was very successful. In 1926 she created the role of  Liu in Puccini’s ‘’Turandot’’ for the opera house of . The same part she sang in 1928 in the festival in the Arena di Verona. In 1926 she appeared in as Musetta. She had big success in the Italian provincial stages. In 1929 she sang at the Teatro San Carlo, in the premiere of the opera ‘’Don Giovanni’’ of Felice Lattuada. In 1934 she at La Scala again the role of Musetta in ‘’La Boh¨me’’ which counted as her star role. She had married in 1930 the composer and conductor Stefano Vittadini and probably retired from the stage.

Posted by Ashot Arakelyan at 5:27 PM