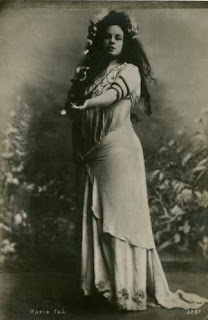 Her real name was Maria Pichot. She wanted to become originally a sculptor, however, studied at the same time autodidactically singing. Supposedly her voice was discovered at the age of 16 years in a prison. She was arrested for singing revolutionary or nationalist songs. She became a pupil of Juan Gay in whom she married, but soon they divorced. In 1902 she appeared for the first time in in a concert together with the pianist Raoul Pugno and the violinist Eugène Ysaye. In 1902 she made stage debut in the Théâtre de la Monnaie, as Carmen. Additionally she studied under Ada Adini in . Then she had big success in stages of and . Since 1906 she often guested in the Covent Garden of London (debut as Carmen). In 1907 she sang in La Scala as a beginning role again her Carmen and was very successful in the same playing time there as Orpheus of Gluck and as Amneris in ‘’Aida’’ under A. Toscanini. In the 1908-09 season she was active in the Metropolitan Opera, (debut once more as Carmen opposite Enrico Caruso). She appeared there also in ‘’Cavalleria ruticana’’, ‘’Il Trovatore’’, ‘’Aida’’,  ‘’Falstaff’’ again under A. Toscanini. From 1910-12 and 1915-16 she sang in the Boston Opera; in 1913 she married the famous tenor Giovanni Zenatello (1876-1949). In the first festival of the Arena di Verona, which was built thanks to the couple’s efforts, she sang in 1913 the role of Amneris in ‘’Aida’’, in 1914 the role of Carmen, her star role. In La Scala she appeared in 1913 again as Amneris, also in both big opera houses of , the Grand Opéra and the Opéra-Comique she gave guest performances. On 22. 4. 1915 she sang in the opening season of the Teatro Nacional in as Amneris, like the Carmen one of her star roles, which she also reported in 1924 in . She guested during her career in the big theaters of , and and was during several playing times (1913-27 with interruptions) she was a member of the Chicago Opera. In 1927 she sang for the last time in again the role of Carmen. After retiring from the stage she lived as a pedagogue in .