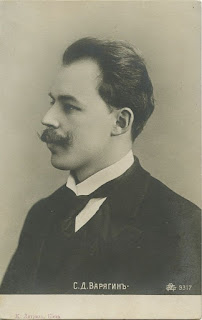 First he studied singing at the Kharkov Music College, then at the St. Petersburg Conservatory. Later he went to Italy and there not only perfected his vocal technique, but also appeared at the provincial opera houses. Since 1896 he sang in St. Petersburg. One year later Ivanov appeared in Kazan, this followed by appearances in Nizhny Novgorod, Zhytomyr, Kamianets-Podilskyi, Kislovodsk, Moscow, St. Petersburg (1902, National House 1903, New Opera 1904-1905), Kharkov (1904), Kiev (1905). Since 1907 he was a soloist of the Moscow Private Opera House (Solodovnikov's Theatre). He made guest appearances in Dresden (1908), Berlin (1911) and La Scala (1913). His repertoire included Marcel in ''Gli Ugonotti'', Zuniga in ''Carmen'', Alvise in ''La Gioconda'', Guritano in ''Ruy Blas'', Cardinal in ''La Juive'', Sparafucile in ''Rigoletto''. In Russia he appeared under the name Sergei Varyagin, in Italy as Sergio Ivanoff.

Posted by Ashot Arakelyan at 12:04 AM