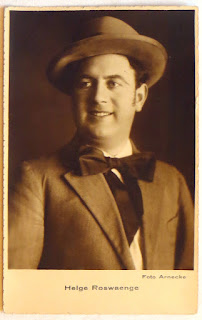 His real name was Helge Anton Rosenvinge Hansen. First he wanted to become a chemist and studied at the technical college of Copenhagen. His voice was discovered when he sang in a circle of friends in Schwerin. His later wife, Hungarian soprano Ilonka Holndonner, exerted herself for the education of his voice and gave together with him in Schwerin a concert. He received his vocal education in Copenhagen and Berlin. After his concert appearances in Denmark, he made his stage debut in 1921 at the Landestheater in Neustrelitz as José in ‘’Carmen’’. He guested in London, Milan, Copenhagen, Stockholm, Brussels,  Amsterdam, Munich, Hamburg and Dresden and with special success in 1933 in Cairo (as Radames in ‘’Aida’’).  Since 1932 he appeared almost annually at the Salzburg Festival. At the Bayreuth Festival he appeared in 1934 and 1936 as Parsifal. He also sang with success in operettas and sang among other things on 31. 12. 1935 at the Berlin Staatsoper in the premiere of E. Künnecke’s operetta "Die große Sünderin". In 1941 he made guest appearance at the Paris Grand Opéra as Belmonte in "Entführung aus dem Serail".  Since 1955 he appeared again at the Berlin Staatsoper, whose honorary member he was appointed. In 1963 and 1964 with great success he sang at the Carnegie Hall and in Madison Square Garden in New York. Later he devoted himself to teaching in Munich. His autobiography appeared under the title ‘’Skratte Pajazzo’’ (Copenhagen, 1945; in German as ‘’Lache Bajazzo’’, Berlin, 1963).

Posted by Ashot Arakelyan at 3:05 PM