He was born in Copenhagen from Swedish descent, as a child came to Stockholm and sang in boys' choir of the Royal Opera. He studied singing in Stockholm under Julius Günther. In 1889 he emigrated to North America and became in New York a pupil of the brothers Jean and Édouard de Reszke. Several years he was active in the USA as a concert and church singer in Chicago, however, came back in 1897 to Sweden. In  the 1901-1904 seasons he belonged to the Svenska teatern in Stockholm, where he created for Sweden among other things the part of father in ''Louise'' by G. Charpentier. In 1905 he was engaged by the Royal Opera in Stockholm, where heappeared up to the end of his stage career in 1928. Here he made his debut as Rocco in ''Fidelio''. Especially he was successful in this opera house as Hagen in "Götterdämmerung", Gurnemanz in ''Parsifal'' and as Pimen in ''Boris Godunov''. In 1910 he sang at the Stockholm Opera in the premiere of Wilhelm Peterson-Berger's opera ''Arlnjot''. In 1921 he undertook concert tour through the USA. 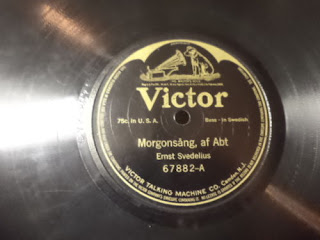 Posted by Ashot Arakelyan at 3:28 PM